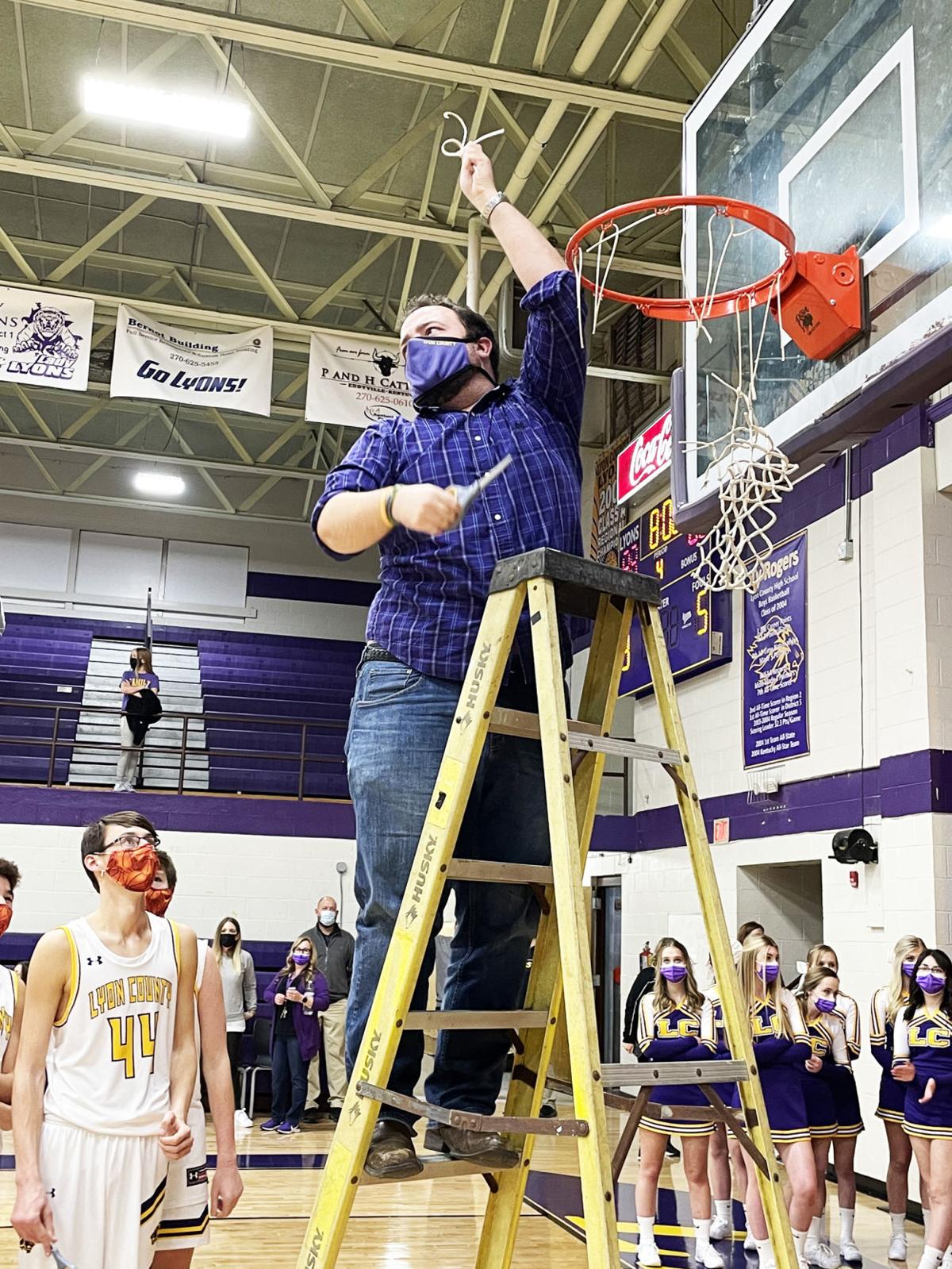 Broadcaster Aaron Clayton cuts down the net after the Lyon County Lyons won the regional All A Classic. Beau Wilson, No. 44, looks on. 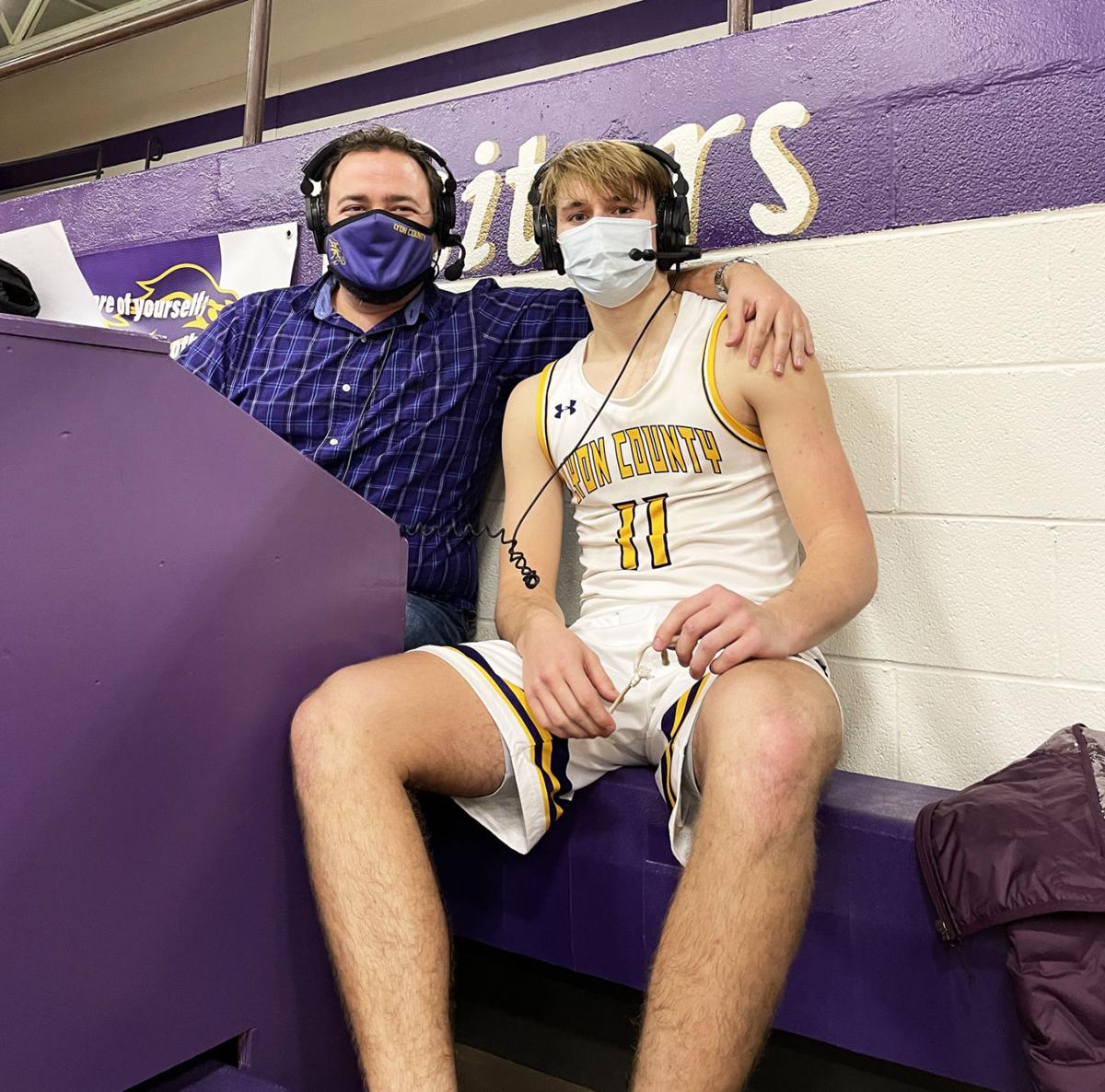 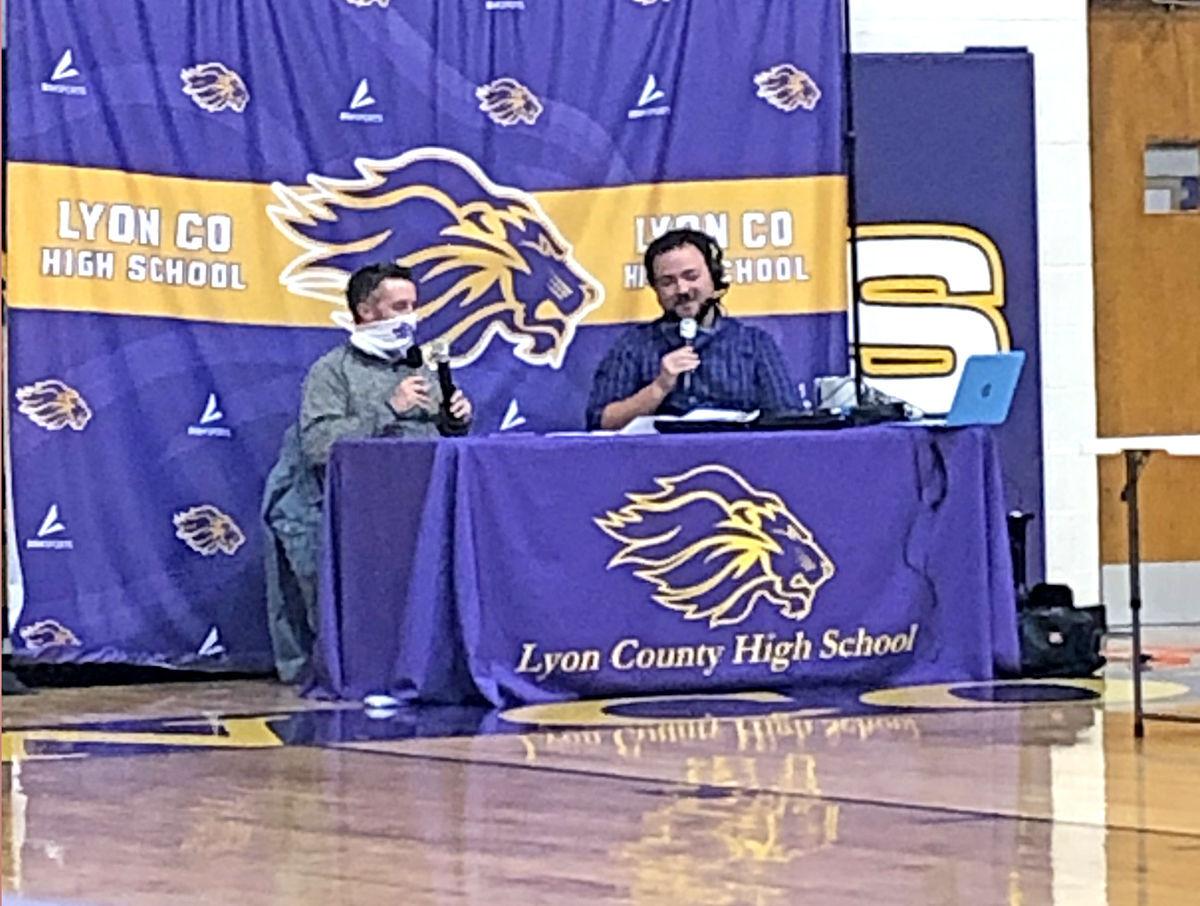 Broadcaster Aaron Clayton cuts down the net after the Lyon County Lyons won the regional All A Classic. Beau Wilson, No. 44, looks on.

You’re driving down a highway. You tune your radio channel to WCCK, Calvert City’s only station. Over the air comes the strong, clear, authoritative play-by-play of a Lyon County High School basketball game. You likely perceive you are listening to sports programming from a national network.

You are in fact, listening to a professional — a homegrown professional — Aaron Clayton. Instead of working locally a few years, then moving on to what some would call “the big time,” Clayton has chosen to remain close to home. He has called Lyon County boys and girls basketball games for the last 10 years. He loves it, and sports fans love him.

Clayton has been in broadcasting 14 years — since he was a 17-year-old senior at Calloway County High School — all with Freeland Broadcasting, the parent company of WCCK, 95.7. “I’ve been in broadcasting since April of 2007,” he said. “… I had been in broadcasting (with) the speech and debate team throughout middle school and high school, and I wanted to pursue radio as a career. I wanted to know how to get started. I was brought to the radio station at WCBL where I have ended up making a career so far.”

WCBL AM and FM are Freeland Broadcasting’s Benton stations, for which Clayton does considerable work besides his Lyon County assignment with WCCK. “In April of 2006, my late grandfather, James Clayton, was very good friends with the station owner, Jim Freeland, and they called to see if I could tag along on the sports broadcast or do anything to help out Jeff Waters, the long-time voice of Marshall County sports,” Clayton said. “Jeff also got his start calling Lyon County basketball … years ago when he was a senior in high school back in 1989.

“I came down here to just meet folks, but I had to go back to school. I was just a junior at that time,” he said. “I just kind of wanted to see for myself a radio station, and that year my grandfather passed away. He was a big supporter of Marshall County athletics. He listened to Jeff call the ball games — the Marshall County Marshals basketball, and he enjoyed University of Kentucky basketball and (St. Louis) Cardinals baseball here on WCBL.

“So fast forward another year to April of ’O7. A friend, Allen Flood, had been here for just a couple of months; he was a year older than I, and graduated from Calloway County in 2006,” Clayton recalled. “… He had been here for a couple of months as the WCBL afternoon disc jockey, and he came back to (Calloway County High) help out with the speech team and he said, ‘Hey, I know you want to be in radio, I’m leaving CBL, would you like a shot at it? ‘I said, ‘Sure,’ so he set up an interview for me here. … I had no experience. Greg Leath, who is the morning man here, has been with CBL off and on for nearly 40 years. So, Greg interviewed me; he said, ‘You’re very young, you have no experience yet, we might get you on part-time, doing some Saturdays or helping out. We’re looking for more experience on the afternoon show.

“I understood, and said, ‘That’s fine.’ Allen Flood really went to bat for me, though I had limited experience,” Clayton said. “They believed Allen, and I got the job, and I’ve been here ever since.”

Clayton’s role has expanded exponentially into production, programing, on-air news, sports, “and a little bit of everything. My original job was to be the afternoon disc jockey,” he said. “I would leave early from school — I had a work release program at school. I’d leave at 2:30, get down here and be on the air at 3 in the afternoons the last semester of my senior year. I’ve been down here 14 years come the middle of April.”

“Lyon County has been a second home to me,” he said. “They took me in 10 years ago when I knew nothing about the county, except it was the north part of Land Between the Lakes and had a water park. Cindy Riley took me over there in 2011. I’ll never forget it. Cindy came to me and said, ‘You are going to call Lyon County basketball,’ and I said, ‘You’ve got to be kidding me?’ She took me over there and said, ‘I’ll introduce you to the coaches.’ I said, ‘OK.’ ”

Riley introduced Clayton to Jeff Embry, the boys coach at that time, then to Athletic Director Jeff Doom. “I had no idea at that time who Jeff Doom was, but within three minutes I knew Jeff Doom very well,” Clayton said.

Doom, now the former AD, quickly became a mentor to the young broadcaster. “I remember, he stopped his class — he was teaching a class in the middle of the day on a weekday.”

Doom told his class: “I want you to meet this guy, he’s going to be the voice of the Lyons. He’s the best thing that has been around here in a long time.”

“He was just aggravating the kids. … But he truly has been one of the best things that has come into my life,” Clayton said. “He has just meant the world to me and my family. He’s gotten me through some of the best times and worst times in my life.”

Clayton praised Doom’s coaching style: “He has brought those boys and those girls along — whether they have won 100 games or not a single game,” Clayton said. I love being around them because they are just good people to be around, and I’m so happy for their successes. It means the world to me as well.

“This year’s team is amazing — the boys basketball team is the best they have had in 30 years without a doubt — going to the regional tournament and trying to win the region for the first time in 70 years — 1951.”

Clayton explained how difficult it is for teams from small schools such as Lyon County to win when competing with the giant schools in the Second Region. “It’s very difficult with Lyon County being the second smallest school in the region. Dawson Springs is the only school that is smaller,” Clayton said, noting there is no classification, and the Lyons must compete with Hopkinsville, Crittenden County, University Heights Academy, Henderson County and Madisonville every year. “It is just nearly impossible.”

Besides his work in Lyon and Marshall counties, Clayton also works with Murray State University athletics “helping out on football radio broadcasts” with Bill Bradley.

Though Clayton, the son of David Clayton and Karen Henley, grew up in Kirksey in Calloway County, he spent much time with his grandparents in Marshall County. His grandfather, James Clayton, was a deacon at New Zion Missionary Baptist Church in Benton, who spent a great deal of time in ministry. So, Clayton feels comfortable establishing his roots here, adding that he recently moved to Gilbertsville