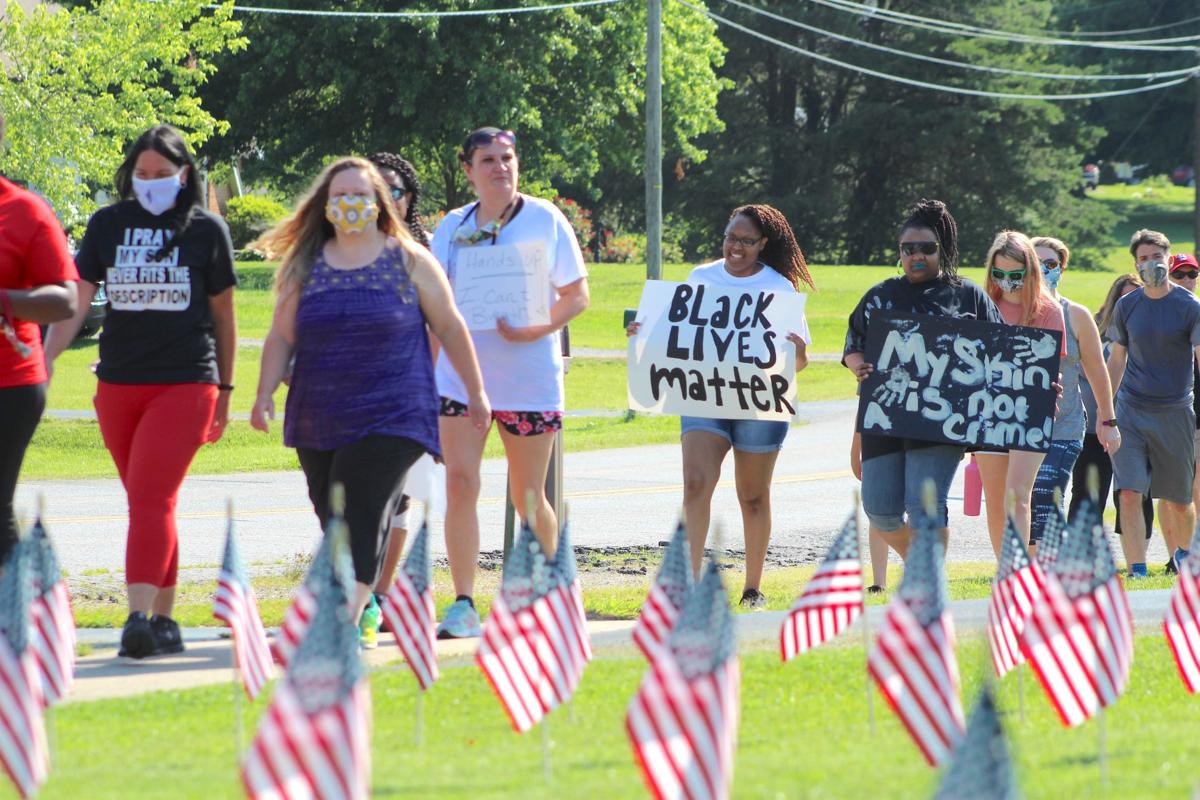 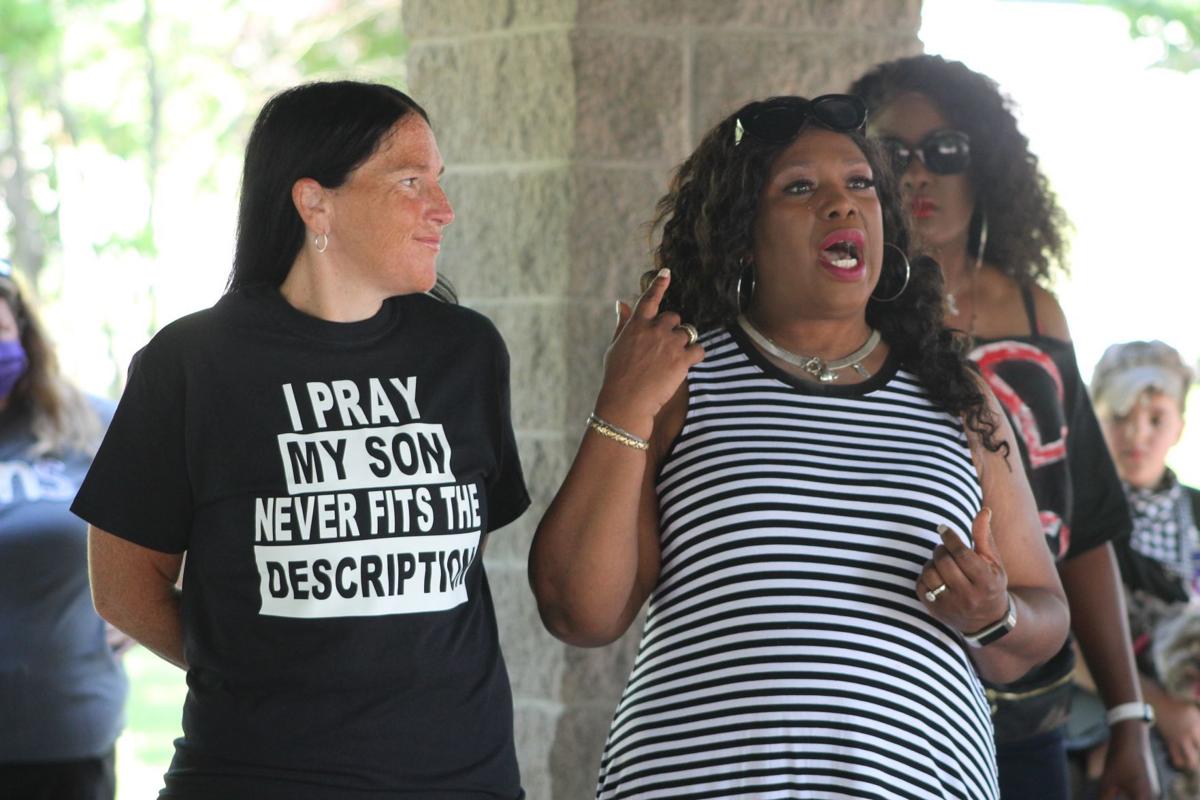 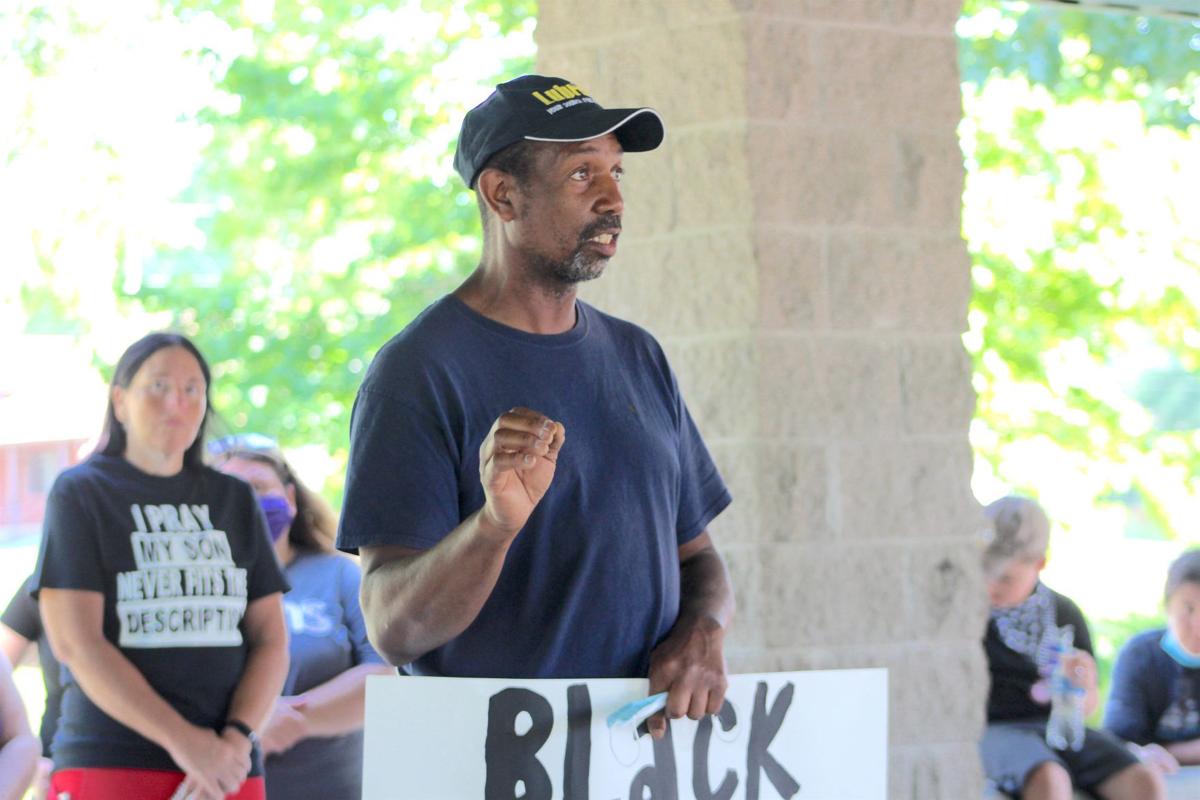 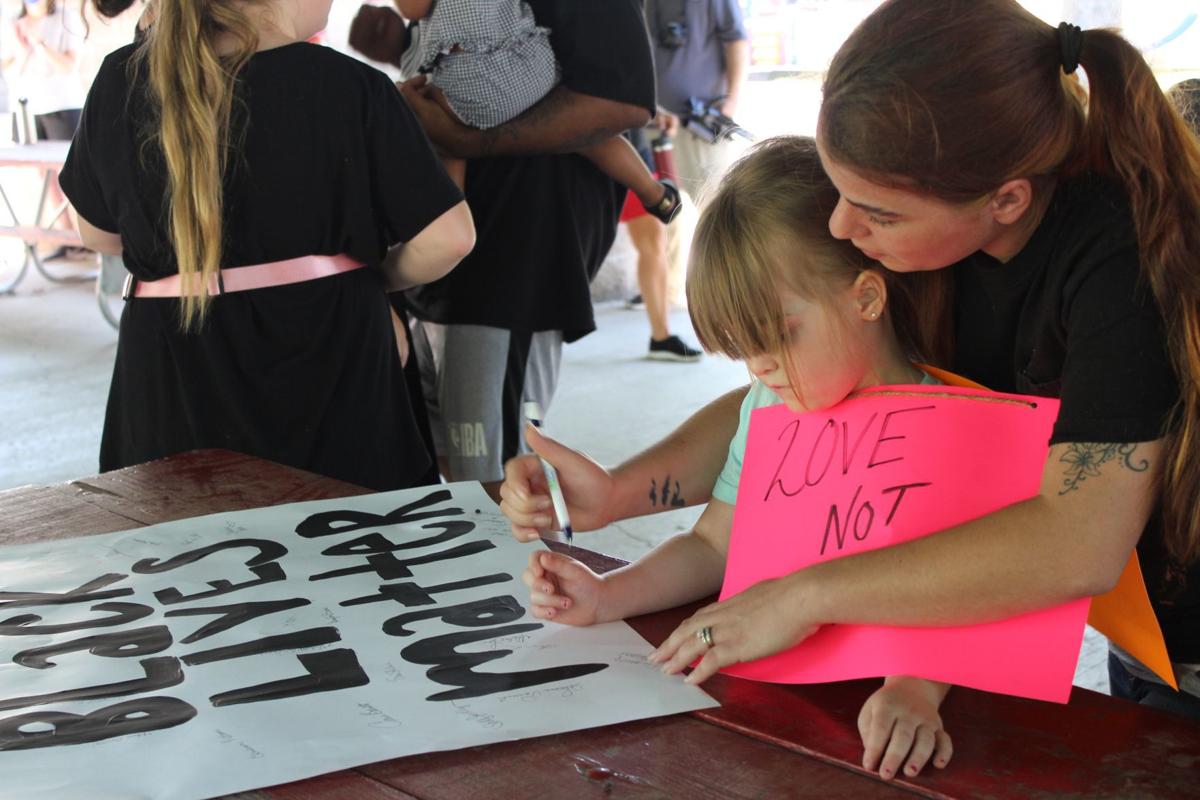 Two participants in Saturday’s Black Lives Matter march and protest in Eddyville lend their signatures to a sign carried on a walk through downtown. Ernie Redd, the brother of demonstration organizer Diane McClure, was moved by the support shown the cause on the day and pledged to hold onto the sign as a keepsake, asking everyone in attendance to sign.

Two participants in Saturday’s Black Lives Matter march and protest in Eddyville lend their signatures to a sign carried on a walk through downtown. Ernie Redd, the brother of demonstration organizer Diane McClure, was moved by the support shown the cause on the day and pledged to hold onto the sign as a keepsake, asking everyone in attendance to sign.

Diane McClure does not want her grandsons to grow up in a world where they are scared of police or feel discriminated against because of their darker skin tone.

“It’s just color,” said the organizer of Saturday’s Black Lives Matter march and protest in Eddyville. “It’s what’s in your heart that matters. We’re no different.”

As a black woman, McClure said that in her hometown, she has never felt the injustice in America that drove her to plan the demonstration against police brutality and racial prejudice. But speaking to about 50 mostly white demonstrators who joined her on a march through downtown Eddyville, the Lyon County native became emotional as she drew on the long history of hate and disregard for black lives.

“You can’t say you love God and hate your brother,” she told supporters sheltering from the late spring sun under the pavilion at Eddyville City Park. “I don’t understand that. I guess I never will.”

McClure is an Eddyville business owner and said she has felt very supported in everything she has done locally. And while she struggles to understand why some police seem to use excessive and deadly force frequently against blacks, she singled out Lyon County Sheriff Brent White and Eddyville Police Chief Jamie Green for helping her to organize a peaceful, lawful demonstration.

“Not all police are bad,” she stressed, but calling out a stereotyping of blacks as “thugs” by some in law enforcement and positions of authority. “But why do you put a knee on a black man’s neck? I still don’t understand.”

Her reference to a Minneapolis police officer who killed George Floyd in May by placing his knee on the black man’s neck for nearly 9 minutes during an arrest drew a response for what was seemingly a rhetorical question.

“Ignorance,” exclaimed one of the white demonstrators.

Floyd’s murder has sparked an uprising across the nation and globe, with some protests turning violent and destructive. And just hours before Saturday’s march, Rayshard Brooks, a black man, was fatally shot by police at an Atlanta Wendy’s drive-thru after being questioned about falling asleep in his car and scuffling with officers. That questionable use of deadly force led to riots in the city Saturday and a fire that burned down the restaurant.

But like most demonstrations in western Kentucky, the local protest over the weekend was about peace and a call for change. That plea was underscored when McClure opened her speech with a question.

“Who would trade places with me?” she pointedly asked whites in the crowd, getting no response.

White said 21 law enforcement officers from Lyon County, Eddyville and outside agencies were present Saturday to protect property and constitutional rights in the event of any disorderly conduct, but they remained out of sight. And authorities were able to convince a group of anti-protesters to stay away Saturday.

“What we didn’t tell anyone was there were local citizens and an outside group who wanted to come protest the protest in support of police,” the sheriff said. “Interesting dichotomy; asking people to not show up and support you so you can protect a somewhat opposing group so they can protest your profession.”

There were no harsh tones, chants or slogans Saturday as the march made its way through town, only a few signs expressing anger over brutality and others emphasizing equality.

“You kill our fathers, but make fun of us for not having one,” read one sign held by a biracial teen. “Justice for all victims of police brutality,” expressed another carried by a white woman.

The sheriff said he appreciates the cooperation and how Saturday unfolded.

“They were a good group,” he said, “not influenced by the outsiders who have caused problems for other communities.”

Taunya Lewis of Marion toted a bright yellow sign around her neck with the words “Black lives matter.” At 62, she said she has seen the country endure prejudice for a long time.

“There needs to be change,” said the mother of a biracial son, as many in the mixed crowd danced together. “We know the fear.”

“You have made a difference in our lives,” he said, noting the fact that white demonstrators outnumbered blacks by about 4 to 1. “I thank every one of you today.”

McClure knows there is a long way to go before every American feels equal in the eyes of the law and society. But she is hopeful.

“I did this so that someday, you may look back on this and say, ‘I did something that mattered,’ ” she said. “I pray that everything will change after today.”