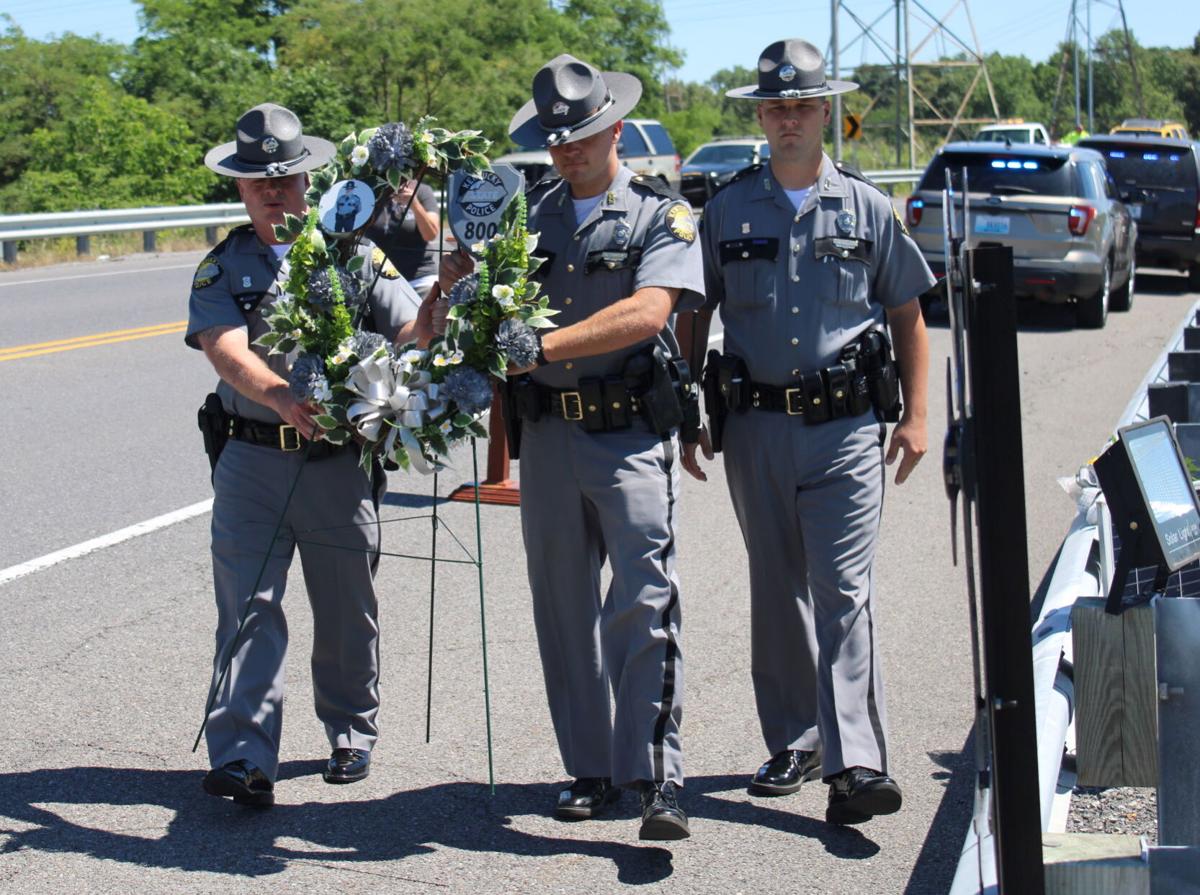 Senior Troopers Derral Redwine (left) and Will Propes carry a wreath in a memorial ceremony Wednesday to the marker at the site of Trooper Eric Chrisman’s fatal 2015 collision. Senior Trooper Adam Jones accompanies the wreath detail. 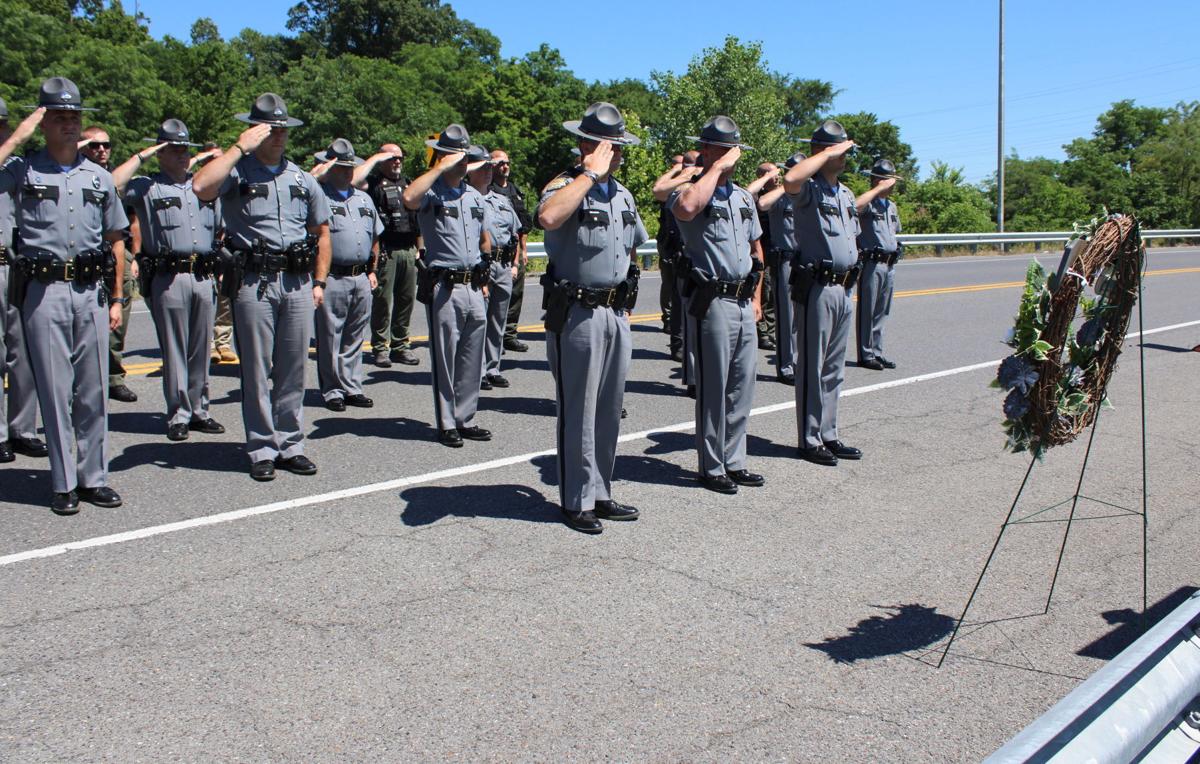 Troopers from Kentucky State Police Post 1 in Hickory salute the memory of Trooper Eric Chrisman, who died in a collision in Livingston County in 2015 while on duty, during a memorial ceremony on Wednesday at the site.

Senior Troopers Derral Redwine (left) and Will Propes carry a wreath in a memorial ceremony Wednesday to the marker at the site of Trooper Eric Chrisman’s fatal 2015 collision. Senior Trooper Adam Jones accompanies the wreath detail.

Troopers from Kentucky State Police Post 1 in Hickory salute the memory of Trooper Eric Chrisman, who died in a collision in Livingston County in 2015 while on duty, during a memorial ceremony on Wednesday at the site.

GRAND RIVERS — Troopers from Kentucky State Police Post 1 in Hickory, family and friends turned out last Wednesday to pay homage to Eric Chrisman, a trooper who died in a collision with a semi while on duty on that date in 2015. He was 23.

State police stopped traffic in both directions for the 10-minute service.

There is a marker and a flagpole at the site where Chrisman died on U.S. 62 on the east side of the Kentucky Dam bridge in Livingston County, where an annual memorial ceremony takes place each June 23.

Chrisman graduated from the KSP Academy Class 92 in January 2015 and worked out of Post 1, where he was assigned to Lyon County. He was responding to a complaint of a reckless driver and was driving westbound when authorities said he failed to negotiate a turn, lost control of the vehicle and crossed into the path of a 2015 Freightliner semi traveling eastbound.

Ky. Highway 326 in Anderson County, his home county, was renamed the Trooper Eric K. Chrisman Memorial Highway in his honor in November 2016.

In Wednesday’s ceremony, Troopers Derral Redwine and Will Propes placed a wreath at the site marker and Ronnie Payton played taps as troopers from Post 1 saluted Chrisman’s memory.

Maj. Janet Barnett (ret.) was the Post 1 commander when Chrisman served there.

“I think it’s important for the troopers and the Chrisman family to know that we honor Eric today and every day with the service we provide,” she said. “He was an important part of our post. He wasn’t with us very long, but he did have an impact on everyone’s life that he came in contact with.

“(This ceremony) is a way we honor his memory, and the members of his family and his community know that no matter how much time passes, he’s always going to be honored for his sacrifice. I drive by here often during my travels, and I’m always humbled by the way he lived his life and served his community.”

Chrisman’s parents, Randy and Dawn, were on hand for the ceremony and spoke of the pride they had for their son’s service.

“It’s hard to believe it’s been six years ago,” Randy said. “When Eric was killed right here at this spot, state police told us that night when they gave us the news that he would never be forgotten. Post 1 has gone above and beyond to stop traffic and have a memorial service here to honor Eric and his sacrifice. We appreciate that so much.

Christian Academy of Lawrenceburg, Chrisman’s alma mater, offers a scholarship in his name, and Lyon County High School offers scholarships in Chrisman’s name and in the name of Cameron Ponder, a trooper who was killed in action on a traffic stop on Interstate 24 in September 2015.

Soon after Chrisman died, writings were found on his desk that he had apparently written to demonstrate his commitment to his chosen profession that was carved into his headstone.

“I will protect those who need protection, serve those in need, show compassion, stand up to the bully, be the best I can be at everything, never give less than my all,” it reads. “My God is first, my family is second — everyone is family.”