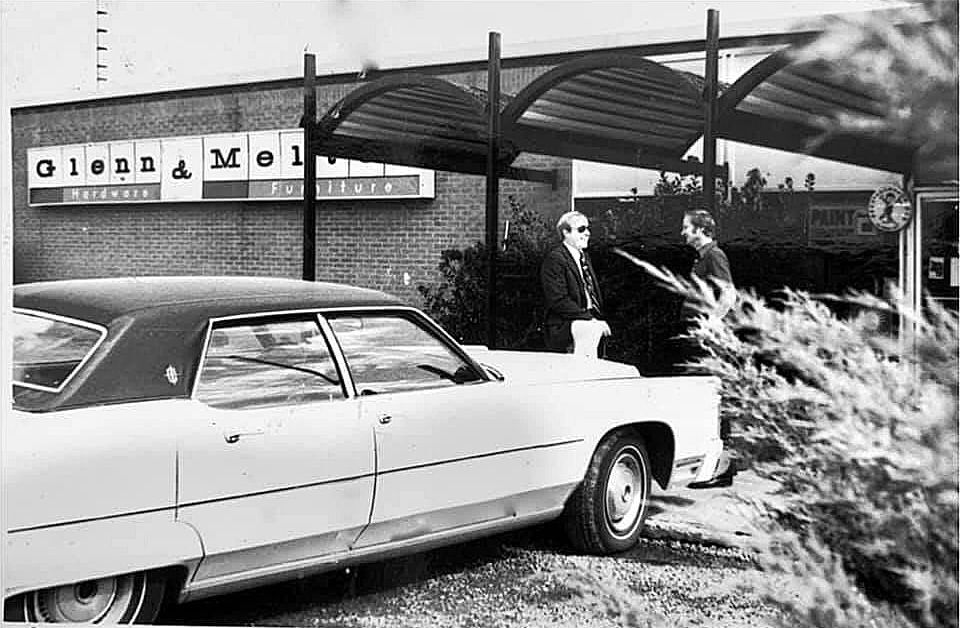 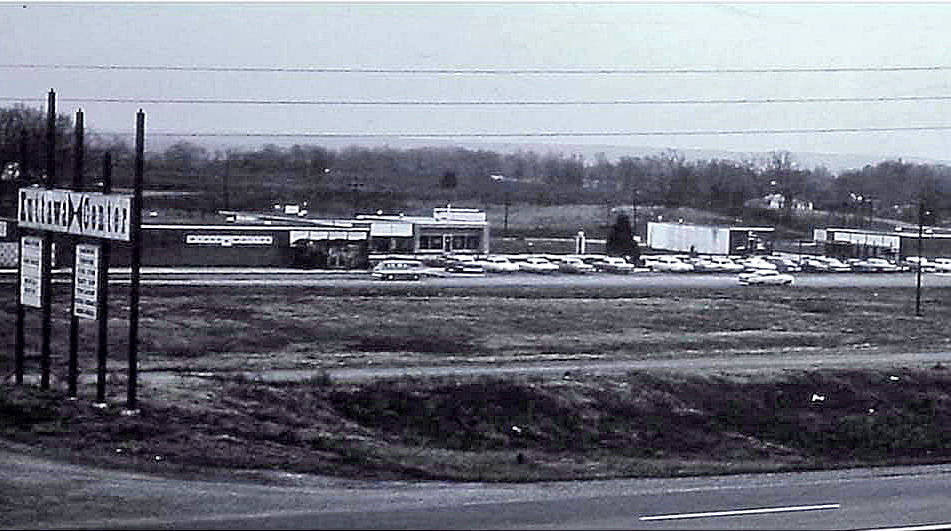 Glenn and Melton as it appeared in this rare photograph of New Kuttawa Center in 1966.

Samuel Glenn & Son Hardware in a snowy Old Kuttawa, circa 1942. 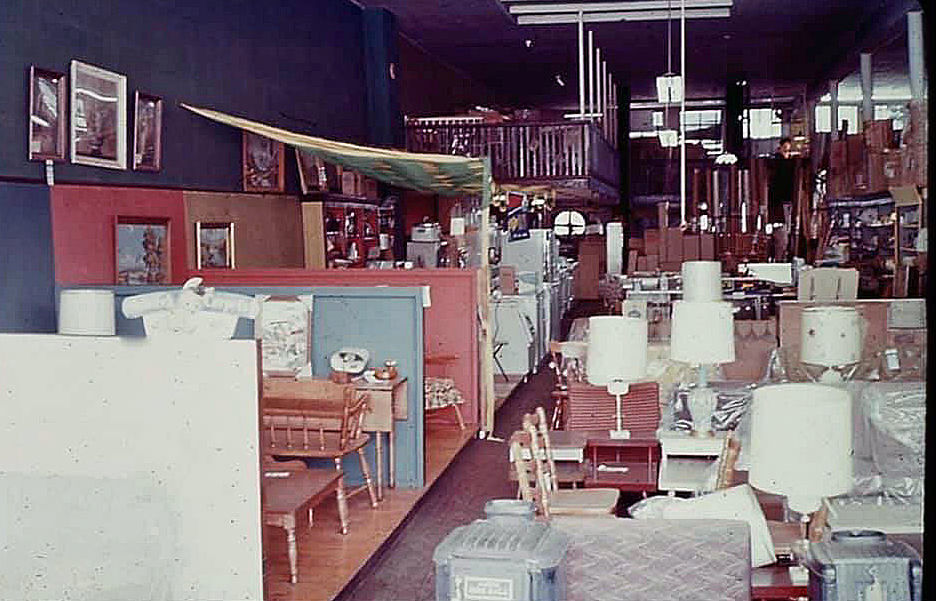 The interior of Glenn and Melton in 1960. 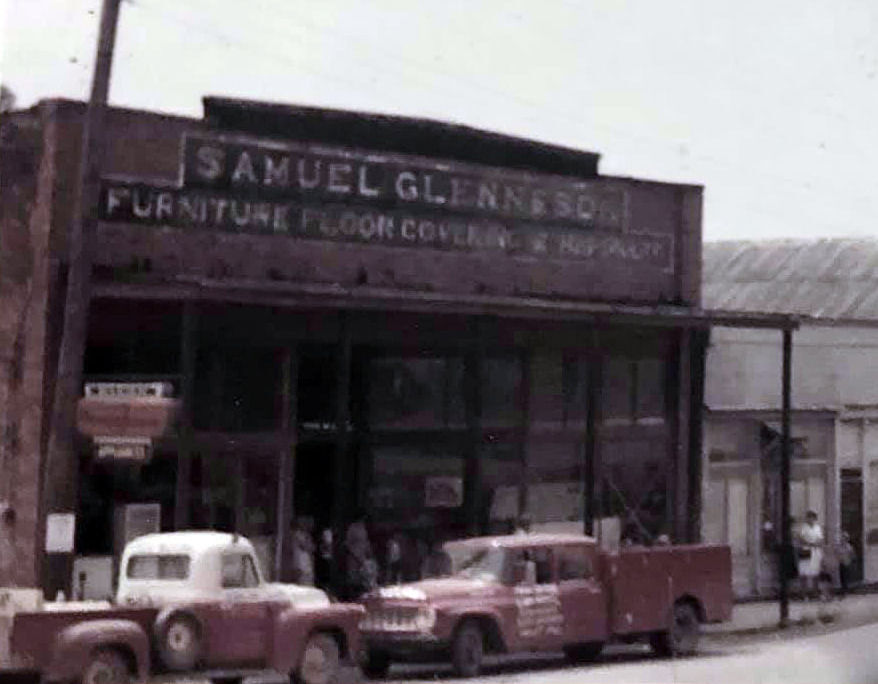 Glenn and Melton as it appeared in this rare photograph of New Kuttawa Center in 1966.

Samuel Glenn & Son Hardware in a snowy Old Kuttawa, circa 1942.

The interior of Glenn and Melton in 1960.

Almost one year has passed since the demolition of a local Lyon County landmark, the Glenn and Melton Furniture and Hardware Store in downtown Kuttawa. To mark this anniversary, Christian’s History Corner is running an article written by Philip Glenn’s granddaughters, Beth Melton Stinnett and Sara Melton Henson, that explores their family’s lasting legacy over the past century. Prolific American scholar and editor Charles Angoff once observed that “history is a symphony of echoes heard and unheard. It is a poem with events as verses.” The following notes, the melodies that form through Beth and Sara’s thoughtful prose, do much to enrich Kuttawa’s beautiful historical symphony.

Pause now, for just a moment, and listen. — Christian Greco

'All in the family'

The City of Kuttawa will soon demolish the building formerly occupied by Glenn and Melton Furniture and Hardware. Many local residents will remember this Kuttawa family business that spanned three generations. In 1899, Samuel Glenn bought half interest in a mercantile business in Kuttawa owned by H.C. Cobb and became partners of Glenn and Cobb. In 1907, Samuel Glenn bought Cobb’s half of the business and became the sole owner of Samuel Glenn Mercantile. The store, as well as the town of Kuttawa, prospered in the early 1900s. According to a Tennessean newspaper, in 1915, Samuel Glenn was one of the leading retail merchants and receivers of freight in the lower Cumberland River Territory.

In 1936, Samuel’s son, J. Philip Glenn, returned to Kuttawa after graduating from the University of Kentucky and a professorship at Emory University. He joined his father in business and the name was changed to Samuel Glenn and Son. Both Samuel and Philip Glenn were active members of Kuttawa’s business community. Samuel Glenn passed away in 1950, but the firm still retained the Samuel Glenn and Son name. Philip’s wife, Ruth, became an integral part of the store overseeing the furniture and housewares.

In 1956, after earning an MBA at University of Kentucky, Charles “Chuck” Melton, moved to Kuttawa with his wife, Eloise Glenn Melton (daughter of Philip and Ruth), and became a partner with Philip Glenn. The company name became Glenn and Melton and remained the same until the business closed in 1986. Many will remember the Glenn and Melton logo, “We Build and Furnish your Home.”

With the impounding of Barkley Dam, in the early 1960s the original store in “Old Kuttawa” was flooded by the lake and in 1963 the business moved to the site where the building stands today. The new Kuttawa Center was forecast to be “one of the most modern business districts in the nation.” The core of the new town was to be a mall-type shopping center with all the businesses located around a central pedestrian mall. There was great excitement for the new town to move on from the heartache of losing half of the old town in the impoundment.

At that time Glenn and Melton building supplies and appliances business relocated separately further east on Cedar Street and was known to most as the Lumber Yard. Ruth and Philip Glenn manned the lumber yard. Glenn and Melton also contracted to build many of the homes in “New Kuttawa.” Glenn and Melton not only built the homes, but offered furniture, appliances and floor to ceiling décor for the homes. Mrs. Glenn obtained her interior decorator certification to aid in putting together the perfect furnishings for the new homes down to window coverings.

Eloise Melton was bookkeeper and purchaser of furniture, housewares and gifts. Many area brides had their wedding registries at the store and could register for everything from lamps and silverware to lawnmowers. The store offered complimentary gift wrap.

The Melton daughters, Beth and Sara, became gift wrappers when they were old enough to handle the gifts carefully. Beth jokes that the most challenging gift she ever wrapped was a wheelbarrow selected as a Christmas gift!

As teenagers the girls loved working at the store in sales, but were also given less desirable jobs, like inventorying nuts and bolts, mixing paint or washing windows. Glenn and Melton was truly a family business!

Beth and Sara have fond memories of growing up in the store. As children, the store was their big playhouse, with built in “rooms” of furniture and lumber lofts for secret clubs with their friends. Sara remembers she loved to nap on the rolls of carpet and climb on the walls behind the store. Beth also remembers the store in Old Kuttawa and loved the old-fashioned sliding ladders in the hardware area, but her favorite memory of the old store is what she called “the magic floor.” One entire section of the main floor could go up and down on pulleys to load furniture and appliances up to the selling floor from the delivery area underneath. As a young child, the best treat was to get to sit on a sofa as it went up or down!

Sadly, the 1980s brought changes for many small-town businesses including Glenn and Melton. Both girls moved away after graduating from college and did not join the family business. The Glenns retired in 1980 and the lumber yard was closed. The Meltons ran the furniture and hardware business until it closed in 1986 and they moved to Florida. The building was sold a few years later to a local resident, but great hopes for several ventures in the space never worked out. As it stands today, the building is nothing but a shell, but four generations worth of memories of the family business will live on forever.