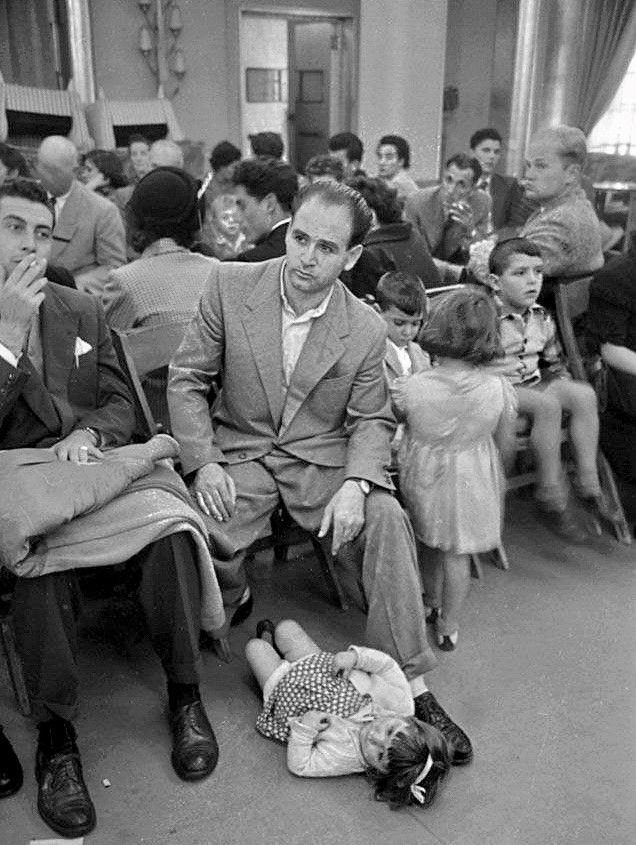 Raffaele Greco (this author’s grandfather) sits aboard the Saturnia with his children, including the author’s father, Michael Greco (seated at far right) on Oct. 22, 1950. 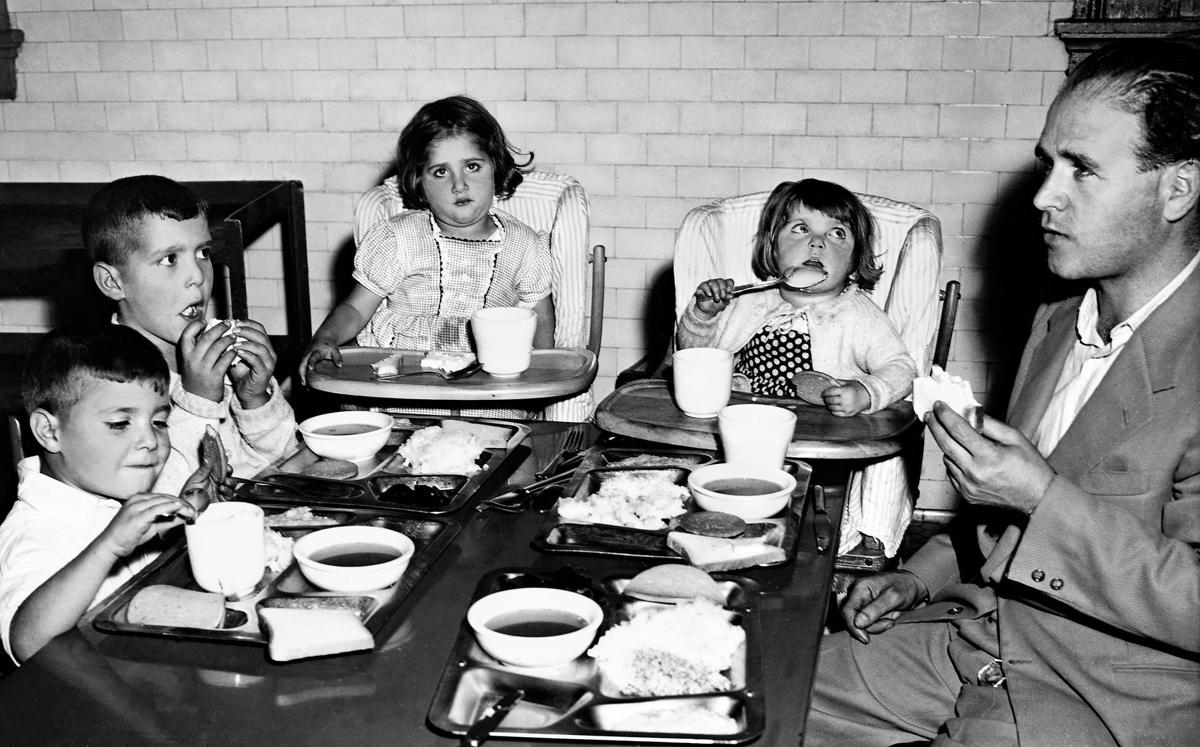 The Grecos in Ellis Island’s Dining Hall — October 1950. (The author’s father is seated at left, holding a sandwich.) 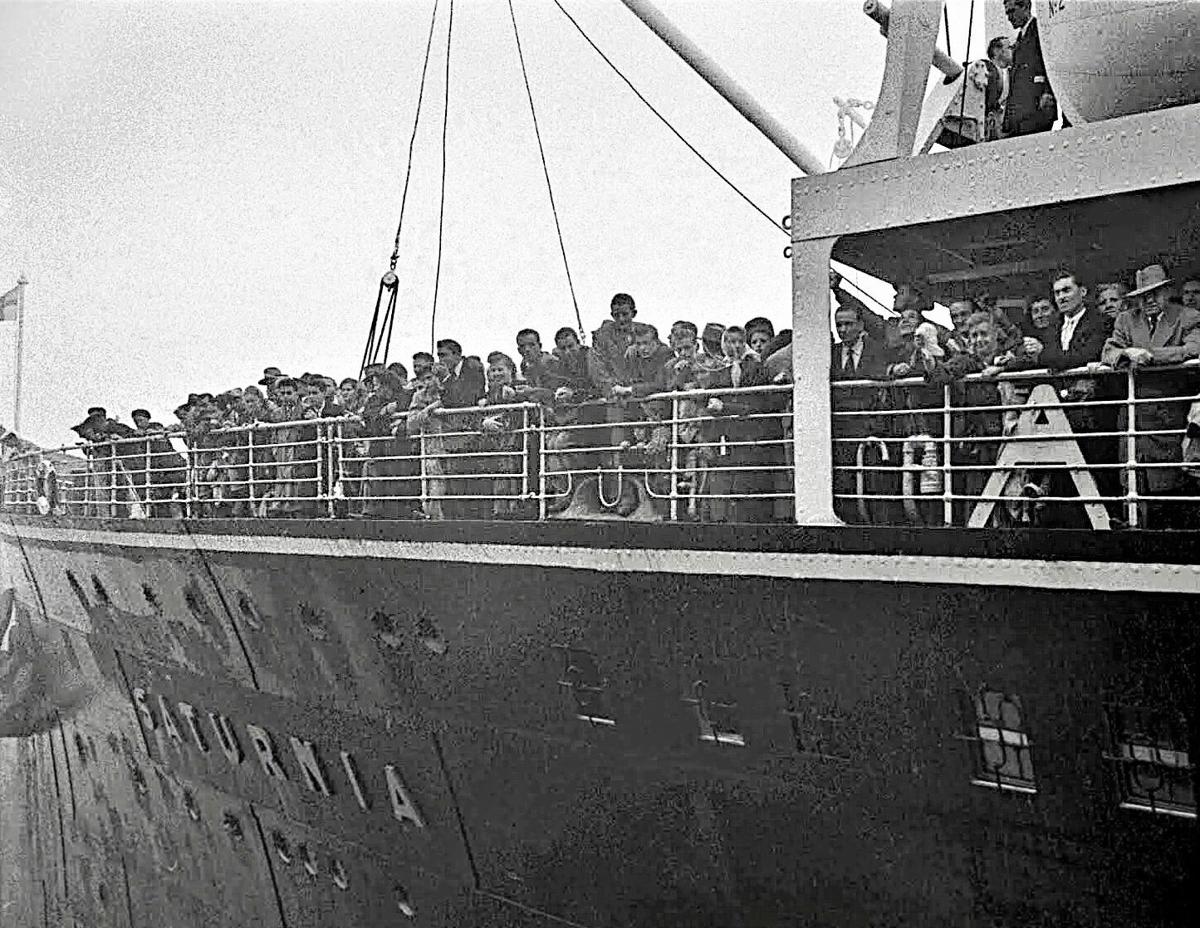 Above left: The S.S. Saturnia Arrives in New York Harbor from Naples, Italy, on Oct. 22, 1950. The Greco family is standing on deck. Above right: The Saturnia’s First Class “Social Room” — site of the initial immigrant interrogation on Oct. 22, 1953. 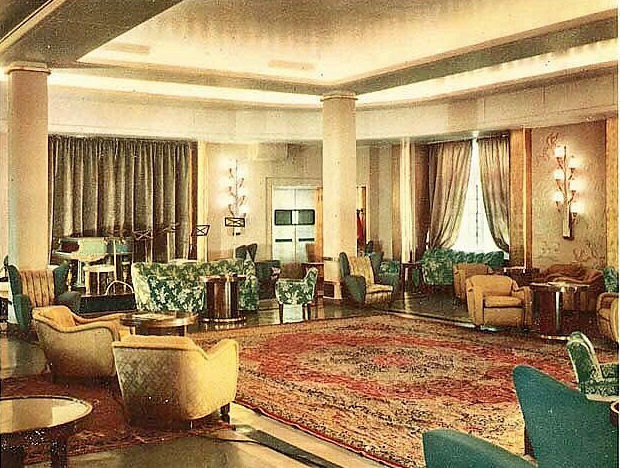 Raffaele Greco (this author’s grandfather) sits aboard the Saturnia with his children, including the author’s father, Michael Greco (seated at far right) on Oct. 22, 1950.

The Grecos in Ellis Island’s Dining Hall — October 1950. (The author’s father is seated at left, holding a sandwich.)

Above left: The S.S. Saturnia Arrives in New York Harbor from Naples, Italy, on Oct. 22, 1950. The Greco family is standing on deck. Above right: The Saturnia’s First Class “Social Room” — site of the initial immigrant interrogation on Oct. 22, 1953.

Every July Fourth, as we gather together to celebrate this wonderful, fragile American experiment with patriotic music, BBQ and fireworks, I find myself pausing to contemplate my small, symbolic role in our national narrative. I am a first generation American. I am the son of an immigrant, and the product of an unmistakably American tale.

On Sunday, Oct. 22, 1950, my grandfather, my father, my uncle and two of my aunts arrived in New York Harbor aboard a ship called the S.S. Saturnia from Naples, Italy. They traveled in steerage, or third class, among passengers who suffered from seasickness and homesickness. The voyage took eight long days. Soon after the Big Apple’s bustling skyline appeared on the horizon, my father, aged 7, vividly recalls watching in wonder as their liner drifted slowly past the Statue of Liberty’s outstretched arms. This very moment was photographed by legendary Life magazine photojournalist Alfred Eisenstaedt, as the Saturnia pulled into port that day. My family is standing somewhere among the weary passengers on deck. (Among Eisenstaedt’s most famous photographs was V-J Day in Times Square, depicting an American sailor kissing a nurse during the victory celebrations in New York City. Eisenstaedt would go on to photograph the likes of Albert Einstein, Marilyn Monroe and John F. Kennedy over a career that spanned almost 70 years.)

Our arrival in America was anything but easy. Just weeks before the Saturnia’s departure from Europe, the U.S. Congress had passed a law called the Internal Security Act of 1950, also known as the McCarran Act. Time magazine later noted that the act was championed as a way to safeguard the nation against the insidious influence of communism in an age of tense, Cold War paranoia. It was controversial from the start; the McCarran Act passed despite a veto by President Truman, who argued that such legislative measures would benefit the communist cause by proving that the United States was not actually the free nation it claimed to be. As Time observed in 1950, the broadly-worded law banned aliens who “at any time” had been “affiliated” with any “section, branch, affiliate, or subdivision” of any “totalitarian party.” In Nazi Germany, nearly every youth was forced to join a Hitler Youth organization; virtually every man who worked for a living had to belong to a Nazi-dominated labor union. In Italy, my grandfather had been conscripted into an Italian fascist youth corps in the 1920s, and then into the Italian army during the war; resisting enlistment would have led to his imprisonment. My grandfather’s service was enough of a red flag to trigger the McCarran Act years later — even though the same would have been true for pretty much any Italian man his age.

Officials estimated that the new law would exclude 90% of all Germans, more than half of all Italians. One 1950 New York Times magazine article noted that immigrants who thought that their visas were already settled were “baffled and bitterly disappointed” to arrive in New York City only to be detained under the act. (It was soon clear the McCarran Act would need fixing. Though its constitutionality was at first upheld in court, many parts of it were struck down over the next few decades.) In the meantime, as the Saturnia arrived in America that fateful autumn day, and law-enforcement officers began to board the ship, its passengers — including my family — did not know what to expect.

My grandfather and others were immediately questioned by authorities — first in the ship’s luxurious “Social Room,” and later in Ellis Island’s storied Registry Room, or “Great Hall.”

Prior to moving to America and settling in Hinsdale, Illinois, in the 1950s, my dad and his siblings were born in a small, hillside town called Rende, in Italy’s Calabria region, to Raffaele Greco and Rosaria Felicetti. As a teenager, my grandfather Raffaele worked as a “calzolaio,” or cobbler, with his father. They were masterful at their craft, capable of creating beautiful, designer shoes by hand for customers who selected the style they wanted by pointing at photos in a glossy designer shoe magazine. My grandfather, who could replicate any footwear style simply by looking at pictures, continued making shoes in Chicago after their arrival in the United States. These and many other evocative stories have always been a cherished part of my family’s narrative. Older photographs documenting the Grecos’ past, however, have not.

For almost seven decades, my family had no idea any images existed of us at Ellis Island. Inspired to look through Time/Life’s vast visual archive a few years ago, I stumbled across a gallery of Eisenstaedt photos that were never published in the magazine. One of them, of a man waiting with his children, looked oddly like my grandfather. (So few photographs of Raffaele exist as a young man that I was not entirely sure it was him.) Then I noticed the little boy seated to his left — a boy who looks a great deal like me. My stunned father, Michael Greco, soon confirmed that he is the child in the picture, and that his dad and siblings are seated next to him. I reached out to Time/Life, and learned that Eisenstaedt had taken hundreds of photographs on assignment at Ellis Island that day, including more of the Grecos.

This discovery fundamentally changed my family’s understanding of our past. We never knew that we had been detained under the McCarran Act, and to this day we do not know how long we were held on Ellis Island because my grandfather, who passed away in 1999, never discussed his experience with us. He was too busy raising a family of 10 children with my grandmother — and focused on supporting their lives and accomplishments as Americans — to contemplate what might have happened if America had turned us away in 1950. (My dad grew up to pursue a career as a trial lawyer, public servant and educator. He later served as president of the American Bar Association, the first foreign-born leader in the history of the ABA.) From the moment he stepped off the Saturnia 71 years ago, my grandfather loved this country, and he was always immensely grateful for the opportunities it afforded us.

My family is but a footnote in America’s inspiring, complicated, 245-year-old immigration story. A small subplot in a never-ending saga. And I am part of its proud legacy. We all are — every single person reading these words. Whether your ancestors floated into New York Harbor beneath Lady Liberty’s beckoning gaze, or crossed the border in a covered wagon, or landed here on a jet plane, we are still the historical sum of these immigrant parts.

Happy Independence Day, America. May we never forget from whence we came.