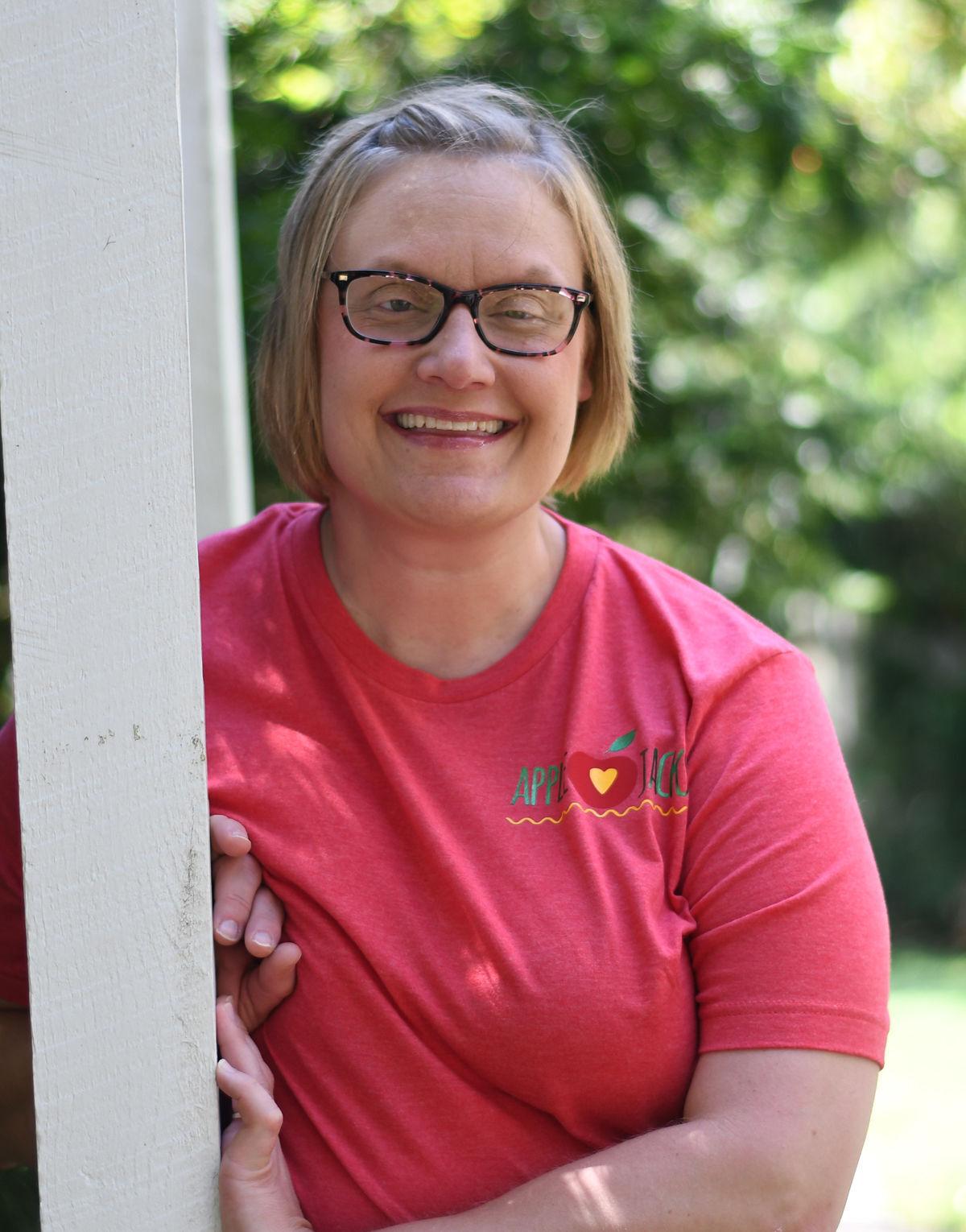 Jacki Greenfield is pictured wearing one of her Apple Jacks shirts. 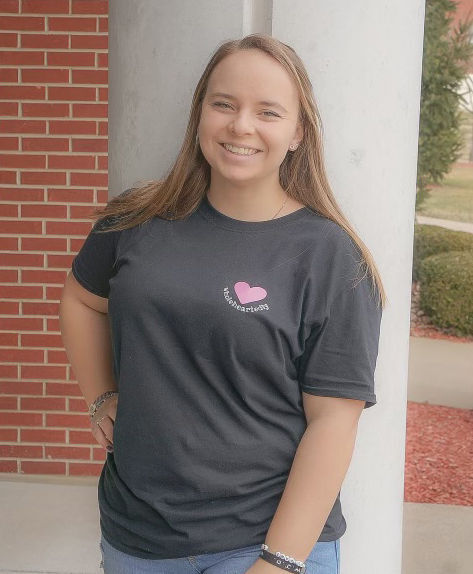 Jacki Greenfield is pictured wearing one of her Apple Jacks shirts.

Jacki Greenfield, 44, had found her place in the world. She taught Kindergarten and she loved it. Then the unbelievable happened.

One day, she was struck blind.

The blindness lasted only seconds, but it set off a series of events that changed her life. “I taught school for 15 years, about half of the time in Mercer County in the Burgin Independent Schools,” she said. “Then when we (she and husband, Kirk) were pregnant with our third daughter, we decided to move back home and be with our family and have some help with the kids. We moved back, and I got a job teaching at Dawson Springs. I taught there for about eight years, the majority of the time teaching kindergarten.

“That was my place in the world; I loved everything about kindergarten,” Greenfield said. “In fact when I graduated from high school I was one of the valedictorians, and I did my speech on the little book, ‘Everything You Need to Know, I Learned in Kindergarten.’ I think God planned that I would teach kindergarten. Unfortunately, one day while teaching — we were just working on our spelling words — and I lost my vision,” she said. “I could not see anything. The students’ faces — basically everything — just turned really gray/white. I wasn’t really in pain; I just didn’t feel normal.”

Greenfield’s total loss of vision lasted a moment or so, but for the next six months, everything was blurry. “I had to completely quit driving,” she said. Her loss of vision occurred April 19, 2013, the day after her birthday. She was 36. The school nurse checked her blood pressure and it was normal. “So I went to the eye doctor, and that began a very, very long journey,” she said. “And I mean long — like six or seven years trying to figure out what was wrong. I tried to continue teaching for a year and a half after it happened, but then it happened again in my classroom.”

She gave up teaching in December 2015, and began going to specialists trying to find a cause for her affliction. “I was still having symptoms; I couldn’t drive at all for six months. I had to quit reading; after six months, I was able to switch to large print and I was able to see it a little better.”

In the quest for the cause of her symptoms, Greenfield sought help from various eye specialists. She was born blind in one eye and she feared she might lose all vision in her seeing eye. “We were really nervous that I might be going blind in my other eye,” she said. “Eye specialists were our starting point, but there was nothing wrong with my eye that could be causing the vision loss. I was also having a lot of dizziness and vertigo. I never had headaches, that was not it. Everybody was saying, ‘Maybe it’s migraines,’ but I never had a headache to go along with the other symptoms.

Finally, last summer — about the Fourth of July — she went to the Mayo Clinic. “I still do not have any verification from MRIs or CT scans, but (doctors at the Mayo Clinic’s) best guess is that I had what they call a vestibular stroke. That means a stroke in the inner ear. Your vestibular system is your balancing system, and it relies on your inner ear, your eyes and your sense of touch.

“I’m one eye down from the beginning, and then my other eye was having vision problems and my inner ear was damaged,” she said. “So my sense of touch is what I rely on the most. That’s why I use a walking stick to help me because it gives me another point of touch like touching the ground, holding on to handrails to make sure of where I am in space. My vision did return to almost normal, but my eye constantly rotates. It’s called oscillopsia. The root word of that is ‘osculum’ like an oscillating fan — it kind of rotates back and forth all the time. It doesn’t stop.

“It doesn’t cause pain but it does make my vision blurry. I can see but everything is distorted,” Greenfield said. “This is the funniest thing — a speck of dirt looks like a bug. We laugh about it a lot now — I’ll (ask), ‘Is that over there on the wall a bug or a piece of dirt?’ Things just look like they are moving, and when I try to look at something at a distance, the letters kind of move.”

Doctors at the Mayo Clinic discovered Greenfield’s inner ear damage through testing. “You cannot get an image of the inner ear on any kind of imaging machine,” she said. “So that’s why we can’t have complete confirmation that it was caused by a stroke, but that is the most likely cause based on my other symptoms.”

She is now under the care of her family doctor and several specialists at Vanderbilt University Medical Center in Nashville, Tennessee. The Mayo Clinic’s model is to see a patient one time, and unless surgery is required, the clinic refers the patient to medical providers closer to home. She now has several doctors at Vanderbilt and sees her family doctor quite a bit.

Unfortunately, Greenfield said, there is no treatment for her condition. At the Mayo Clinic, she was told to limit her driving to local and short distances, and if she is dizzy not to get behind the wheel. That has been a huge change for her because she and her husband have three teenage daughters — Hannah, 19, who just finished her sophomore year at Campbellsville University; Brianna, 15, a freshman at Caldwell High School; and Meleah, 13, a seventh grader at Caldwell County Middle School. “I can’t be the mom taxi like I wish I could,” Greenfield said, adding that the girls’ father has “been fabulous” and many friends also lend a helping hand.

Greenfield concedes she does have depressing moments. “This week, my mom was helping me do some cleaning, and we found one of my tubs of stuff from teaching, and I just cried,” she said. “That’s the one thing that I miss the most.” Even so, she has refused to allow the loss of the career she loved, to dominate her life. In February of 2020, she started her own home-based business. “I’m fairly crafty so I have one of those machines called a Cricut. You use it to cut vinyl and then you can iron (the pieces) onto clothing,” she said.

“When I started the business the goal of it was to make personalized gifts for people that would be just a little bright spot in their day,” she said. “I don’t have an actual shop; I just do it out of my basement. I have a website, applejackgifts.com. Then I post things on Facebook … pictures of something I’ve made. I use my girls as models for some of the shirts I’ve made, put them on Facebook and say, ‘Contact me’ or check it out on my website.”

The second quarter last year, she broke even and the next quarter she made a small profit. Recently, she applied for a job, and it was offered to her, but because it was full-time, she didn’t feel she was ready to accept it. “I’ve had a lot of tears this week just wishing that would be a possibility, but I would have to completely give up my business, and I don’t want to do that,” she said. “This really was a blessing to me to think that somebody had enough confidence in me and would want me to work for them. So it was a plus, but then it was a little setback for me. Overall, I’m doing really well; I’ve come a very long way.”