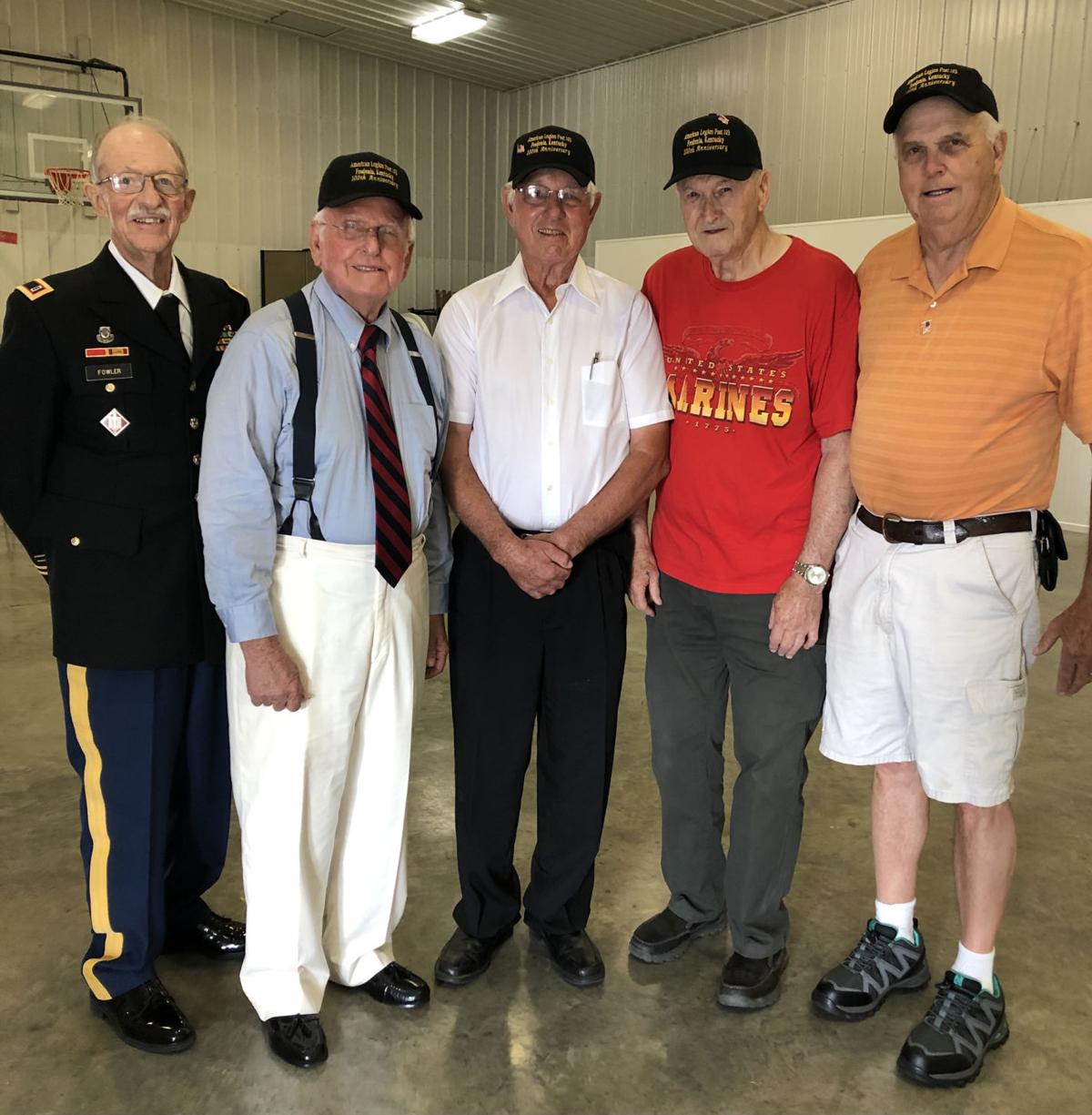 Pictured are some of the American Legion Members (from left) Rudy Fowler, Rodney Paris, Doug Waters, James Rowland, and Mike Board. 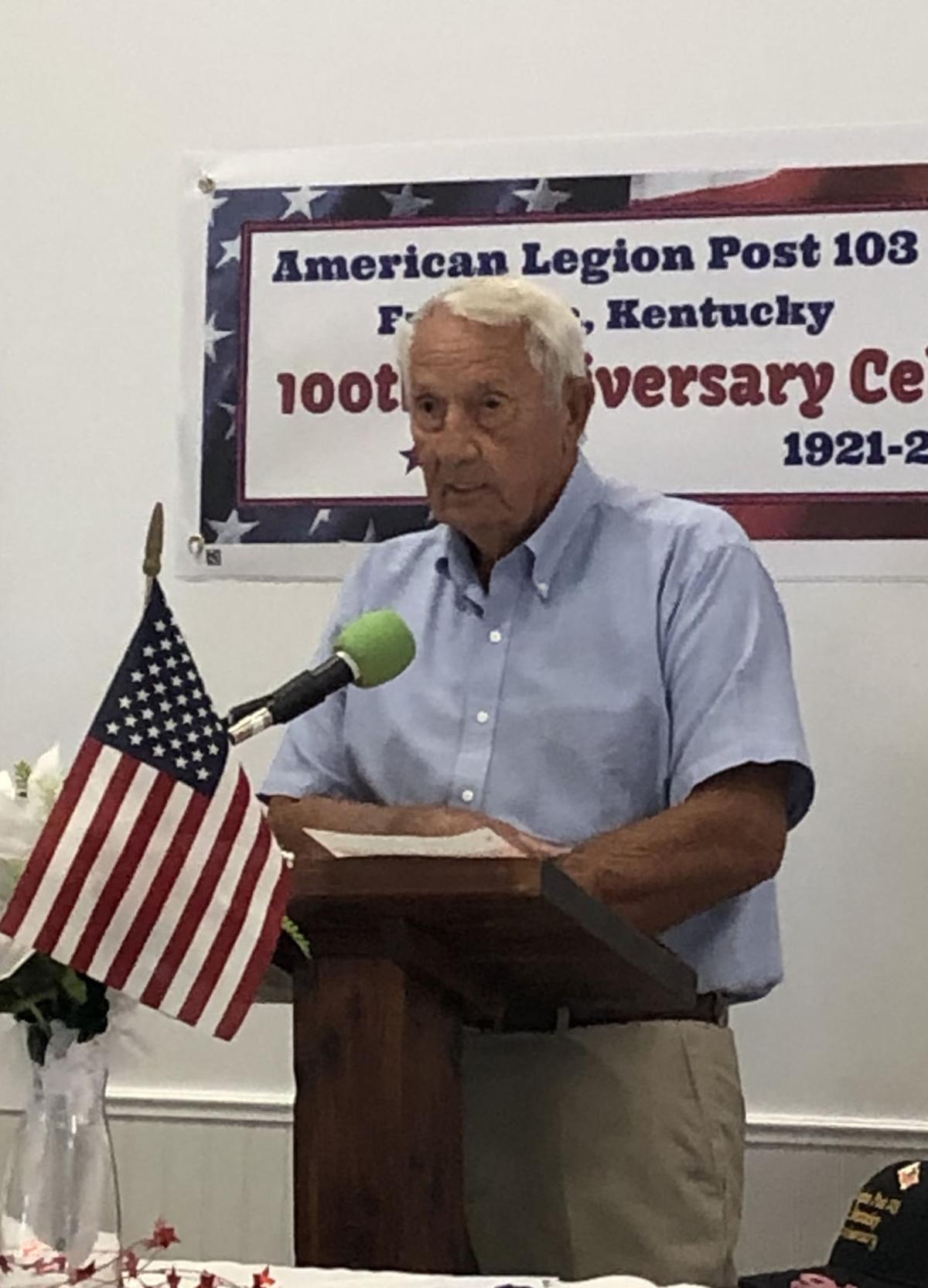 Speaking at the 100th anniversary of the American Legion Post 103 was Glen Keel.

Pictured are some of the American Legion Members (from left) Rudy Fowler, Rodney Paris, Doug Waters, James Rowland, and Mike Board.

Speaking at the 100th anniversary of the American Legion Post 103 was Glen Keel.

American Legion Post 103 has been a vital presence in Fredonia from the time of their organization. Their members have served our country in military service during times of war and peace. Their dedication and service to Fredonia has been unwavering for a century now. There was a large crowd in attendance to recognize this monumental achievement.

The organization was chartered by the National American Legion on July 10, 1921.

Following the singing of our National Anthem, Post Cmdr. James Rowland welcomed those in attendance and led everyone in the Pledge of Allegiance to our flag. Post Adjutant Rudy Fowler read a letter of congratulations from the National Commander of the American Legion.

Bro. Presley Lamm led in prayer, followed by a presentation of the history of American Legion Post 103 by Pam Faughn, president of the Fredonia Valley Heritage Society.

Rodney Paris presented the biography of William M. Young, one of the charter members of Post 103. Sharon Rogers played a musical tribute to each branch of the military with veterans in attendance standing when the theme song for their branch was played. Legion members Glen Keel and Rudy Fowler, both career military, presented the story of their military careers.

Rick Morgan presented a tribute to veterans, followed by closing comments by Rodney Paris. A reception followed the program. Monetary gifts of appreciation were presented to American Legion Post 103 by the Fredonia Valley Heritage Society, Thunder in the Valley, Fredonia Lions Club, First Baptist Church of Fredonia, the Rogers and Faughn Families, and Sam J. Young.

The Fredonia American Legion owns the Buddy Rogers Park in Fredonia, which has been the site for a countless number of Fredonia activities through the years, and which continues to be a hub of activity today.

Currently there are tee-ball and youth leagues playing games at the park. It was recently the venue for “Thunder in the Valley” fireworks and more. In addition, a church softball league will begin games on Aug. 9. It will be the site of the upcoming Fredonia Lions Club Summer Festival on Saturday, Aug. 14. The Fredonia Valley Heritage Society will resume meeting there on Sept. 2.

The community is fortunate to have this venue to be able to come together for all these activities. Thank you to the veterans of Fredonia American Legion Post 103 for their years of dedication and service. Their example and community-minded spirit should inspire each of us to get involved in activities around our community.

In the work that Fredonia American Legion Post 103 has undertaken to provide wholesome and meaningful recreation for young people of Caldwell, Lyon, and Crittenden counties, and their many other activities, the steadfast support of the Morgan Foundation, the County of Caldwell, and many local businesses and organizations must be acknowledged. That support has been absolutely instrumental to the success of those endeavors.

If you are a veteran, Fredonia American Legion Post would encourage you to consider joining their organization. They meet on the first Monday night of each month at 7 p.m. for a meal and meeting.