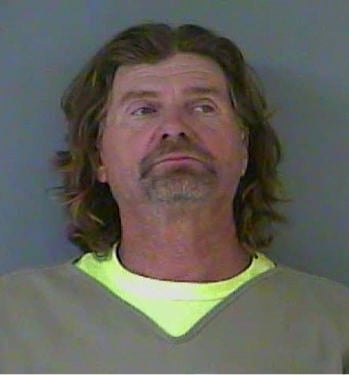 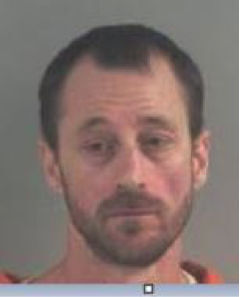 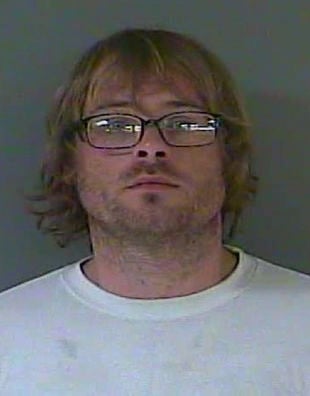 On the Fourth of July at 3:20 p.m., Justin T. Cobb, 25, of Greenville turned himself in to Deputy Sheriff Joe Witherspoon. Cobb was wanted on a Lyon County Circuit Court indictment warrant charging him with first-degree trafficking in a controlled substance, greater than two grams — methamphetamine — first offense, drug paraphernalia possession, and first-degree possession of a controlled substance — heroin — first offense.

The charges stem from an investigation by the Lyon County Sheriff’s Department. He was jailed in Crittenden County Detention Center.

At 8:30 p.m. July 3, Deputy Seth P’Pool and Witherspoon responded to a disturbance at Kuttawa Harbor. The investigation revealed an allegedly intoxicated man riding his horse into the outdoor restaurant and bar area. After being told he was not allowed to do so, he was given the opportunity to leave; however, he allegedly continued to cause a disturbance and was arrested. The man, Gary W. Wagoner, 60, of Kuttawa, was charged with alcohol intoxication in a public place and second-degree disorderly conduct. The sheriff summoned a local farmer to assist in taking care of the horse until Wagoner was released from custody and could claim the animal.

On July 2 about 2 p.m., Lyon County Sheriff’s deputies responded to a 911 call reporting a possible intoxicated person on Ky. 1055 between Perry Springs Road and Ralph Beatty Road. Deputy Sheriff Sam Adams arrived first and found Matthew W. Harris, 29, of Princeton laying in a ditch and screaming. Adams informed Harris he was under arrest. Harris allegedly refused verbal commands and came at Adams in an aggressive manner.

Adams took Harris to the ground and arrested him with assistance from a water department employee who stopped to render help. Later, Harris was alleged to be under the influence of methamphetamine, and was on parole for burglary and theft convictions. He was lodged in the Crittenden County Detention Center.

The sheriff’s office was assisted by Lyon County Emergency Medical Service, and Kentucky Department of Corrections, Division of Probation & Parole.

Also on July 2 at 7:30 p.m., Deputy Seth P’Pool arrested Brian K. Alexander, 41, of Kuttawa, formerly of Symsonia, at a Kuttawa motel charging him on a warrant from Graves County District Court alleging second-degree bail jumping. He was lodged in the Crittenden County Detention Center.

On July 1 at 8 a.m., Sheriff Brent White charged John Paul Hill, 45, of Hopkinsville on a bench warrant from Todd Circuit Court charging him with failure to appear.

Also on July 1 at 2:30 p.m., Adams, White, P’Pool, and Eddyville Police Chief Jaime Green responded to a disturbance in the 1600 block of Elkhorn Tavern Road, east of Eddyville. White found a woman who claimed to be the victim in a domestic dispute. During the investigation, officers located a man alleged to have been the perpetrator in the domestic dispute. Robert G. McGregor Jr., 47, of Princeton, who was found in a nearby mobile home was charged on a bench warrant from Caldwell District Court alleging failure to report to the Caldwell County Jail to serve a 10-day sentence on an unrelated domestic violence incident. He was lodged in the Caldwell County Jail.

At 11:06 p.m. July 1, P’Pool charged Justin D. Connor, 33, on a Lyon County bench warrant alleging failure to pay or appear in a previous case, investigated by the sheriff’s department, in which he was found guilty of criminal trespass and theft offenses. He was lodged in the Crittenden County Detention Center.

At 9:13 a.m. June 30, Deputy Sam Adams investigated a two-vehicle non-injury wreck in Kuttawa, at the Huck’s Travel Center. A 2001 Ford Explorer driven by Christine Hill, 56, of Kuttawa crashed into a parked 2020 GMC Sierra owned by Bennett Motors of Mayfield in the parking lot of the truck stop.

At 9:40 a.m. June 30, Sheriff Brent White responded to U.S. 641 on a possible burglary in progress. A property owner came home to a vehicle in his driveway, which he did not recognize. An investigation revealed a teenager came to the home in the car and accidentally locked the keys in the vehicle with it running, before leaving the property on foot.

The vehicle was blocking a garage, and when the owner could not be located, the vehicle was removed by a wrecker service. During the process, marijuana was observed in the vehicle. Tonya M. Yaw, 46, of Hampton was charged with possession of marijuana and drug paraphernalia possession. She was cited to Lyon District Court.

After the arrival of first responder personnel from multiple local agencies, it was determined the driver of one of the commercial vehicles was deceased. Sheriff Brent White requested Kentucky State Police conduct a collision reconstruction investigation. State police Post 1-Mayfield continue to investigate the wreck.

On June 29 at 9:30 p.m., Witherspoon investigated a two-vehicle non-injury collision in Kuttawa, at the intersection of Days Inn Drive and U.S. 62 West. A 2019 Freightliner driven by Sidney Remarais, 48, of South Hampstead, New York was turning off U.S. 62 onto Days Inn Drive when he collided with a 2019 GMC Acadia driven by Stanley Repasky, 72,of Willow, Oklahoma.

On July 9 at 8:25 a.m., Sheriff Brent White responded to a two-vehicle collision in the 2000 block of Ky. 818 North, approximately seven miles southeast of Eddyville. A 1999 Ford Econoline Van driven by Robert Blake, 76, of Eddyville, was backing down Ky. 818, when the driver backed into a 2011 Lexus SUV being operated in the same lane by Elizabeth Watson, 23, of Maryville, Tennessee. The road was closed briefly but there were no injuries.

About 9:30 a.m. July 9, Sheriff White and Deputy Sam Adams were notified of a driver who was seen operating a van without a license in the Old Eddyville area. White found the driver and the vehicle near the intersection of Ky. 1055, Ky. 293, and Ky. 93 South. The driver, Michael J. Burns, 34, of Eddyville, was driving the van while his license was allegedly suspended in North Carolina for a driving while intoxicated-level II conviction. White arrested Burns charging him with driving on a DUI suspended license-first offense.

Burns was lodged in the Crittenden County Detention Center. At the time of his arrest, Burns was out of custody and on bond conditions from two previous cases; one being in Circuit Court and one in District Court.

On July 9, just before midnight, Deputy Seth P’Pool charged Albert W. Rucker, 20, of Omaha, Nebraska following an extradition of him from out-of-state to Kentucky. Rucker was arrested on a warrant charging him with failure to appear in Lyon Circuit Court following indictments charging him with first-degree trafficking in a controlled substance and giving a peace officer false identifying information. Rucker was lodged in the Crittenden County Detention Center.

On July 8 at 10:09 a.m., a Kentucky State Police trooper initiated a traffic stop on Interstate 69 near the 70-mile marker, northbound. Just minutes into the roadside investigation, the driver allegedly fled from the trooper on foot. State police contacted the Lyon County Sheriff’s office for assistance. Numerous personnel were deployed to assist in the search, and numerous law enforcement agencies were requested to assist once the alleged offender’s identity was determined.

Trevion R. Clary, 30, of Paducah was alleged to be a wanted fugitive with multiple warrants issued for his arrest. “Clary had an extensive criminal history, including a murder charge which was amended to manslaughter in Christian County in 2015,” according to the Lyon County Sheriff’s report.

Multiple local, state, and federal agencies converged on an area between Exit 71 on I-69 to U.S. 62 eastbound to Ky. 93 South near Lee S. Jones Park while a multi-hour search was conducted. The investigation revealed the subject fled on foot in this large area, for a significant amount of time. During this time, he allegedly discarded clothing and a handgun which were recovered by law enforcement. Search teams with bloodhounds from the Department of Corrections assisted law enforcement in tracking the subject; however, he was not located and the heat, in addition to the lack of additional canine resources caused the search to slow. During this time, the subject came upon the rear fenced area of the Lyon County Search & Rescue Squad building off U.S. 62 East near Broadway. He allegedly scaled a fence and broke into the building before physically breaking into another room in the building where he allegedly obtained keys to the rescue vehicles.

He allegedly stole one of the county rescue squad vehicles and fled to Princeton where he stopped in a parking lot near Dollar Tree before going into two stores and shopping for replacement clothing.

In one of the stores, the subject used a telephone to call a relative allegedly seeking help in fleeing the area. Citizens became suspicious and called Pennyrile Central Dispatch who sent Princeton Police to the area. Princeton officers and detectives detained the subject without further incident. The county rescue vehicle was also recovered in Princeton.

Clary was charged on three failure to appear warrants and multiple other warrants including trafficking illegal narcotics, and related offenses, before being lodged in the Christian County Detention Center. Deputy Sheriff Sam Adams has additional pending charges of third-degree burglary, theft by unlawful taking-auto, and criminal mischief relating to the rescue squad building break-in and vehicle theft.

At 7:45 p.m. July 8, Deputy Seth P’Pool answered a call from Livingston County regarding a vehicle and operator who had left Green Turtle Bay Resort in Grand Rivers after allegedly assaulting a bartender at the Thirsty Turtle.

The complaint indicated the driver appeared to be under the influence and was operating an older model red/maroon Ford Ranger pickup truck which was last seen headed in the direction of Lyon County. P’Pool found the vehicle on U.S. 62 near Suwanee and after observing erratic driving, he made a traffic stop on the vehicle in Kuttawa.

P’Pool charged the driver, John T. Collins, 65, of Grand Rivers, with careless driving, driving on a DUI suspended license-first offense, and driving under the influence-second offense. The alleged assault is under investigation by the Livingston County Sheriff’s Department. Collins was jailed in the Crittenden County Detention Center.

On July 7 at 9 a.m., Sheriff Brent White arrested Justin A. Kingston, 30, of Kuttawa on a bench warrant from Warren District Court where he allegedly failed to appear multiple times on a theft by unlawful taking case in that county. Kingston later posted bond and was released from custody.

On July 7, 2021, just after 11 a.m., Deputy Sheriff Sam Adams was called to Kuttawa to investigate a two-vehicle, non-injury wreck on U.S. 62 near New Circle Drive. A 2008 Chevrolet HHR driven by Tara Barkley, 44, of Paducah, was eastbound on U.S. 62 when she changed lanes and struck the rear of a 2008 Freightliner CB, also eastbound on U.S. 62, and driven by Brent Weitlauf, 22, of Benton. The Weitlauf vehicle was stopped in traffic to turn left onto New Circle Drive when the crash occurred.

On July 6, 2021, just after 9 p.m., Deputy Keith Suits made a traffic stop on a Missouri registered 2002 Chevrolet Silverado pickup on Ky. 93, approximately two miles north of Kuttawa. The driver, Gary W. Wagoner, 60,of Kuttawa, was charged with driving under the influence-first offense, Driving on a DUI suspended-first offense, no insurance, rear license plate not illuminated, improper registration, and possession of marijuana.

He was lodged in the Crittenden County Detention Center. At the time of this incident, Wagoner was out of custody on bond in two other Lyon County court cases. On July 7, his previous bond was revoked (for alleged bond violations/charged with new offenses) by a District Court Judge and he was remanded to the custody of the jailer.