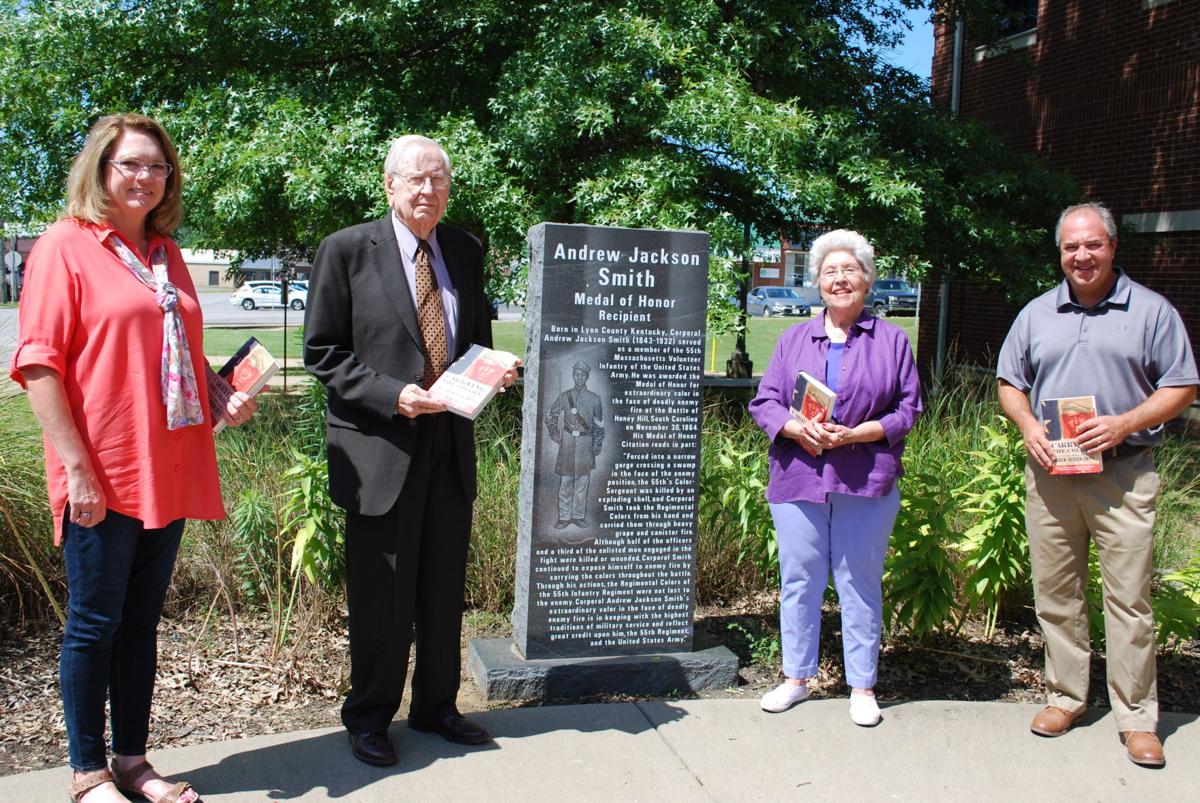 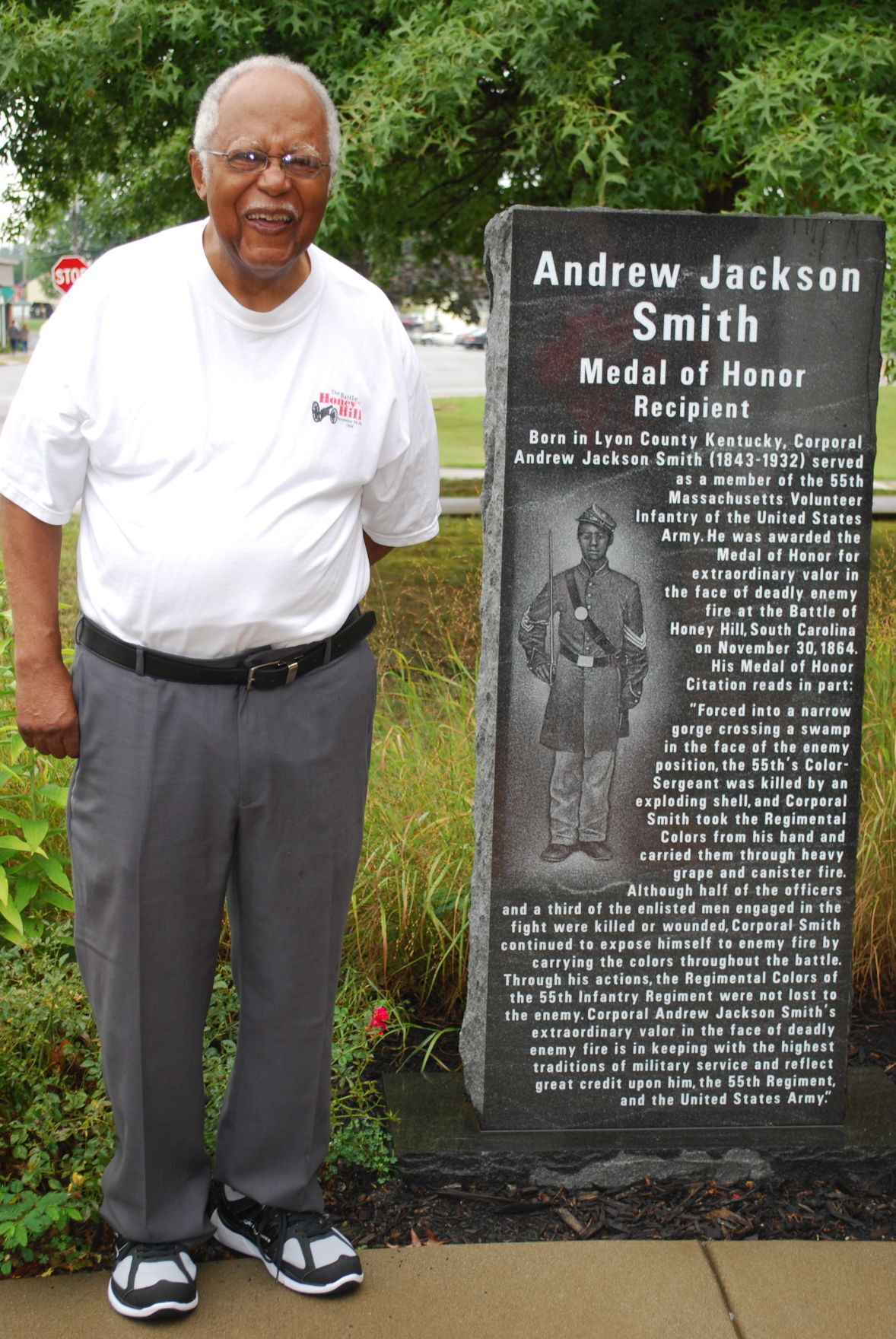 Andrew Bowman, grandson of Medal of Honor recipient Andrew Jackson Smith, stands beside a black granite monument, with his grandfather’s image and story imprinted on it, two years ago when he visited Lyon County. 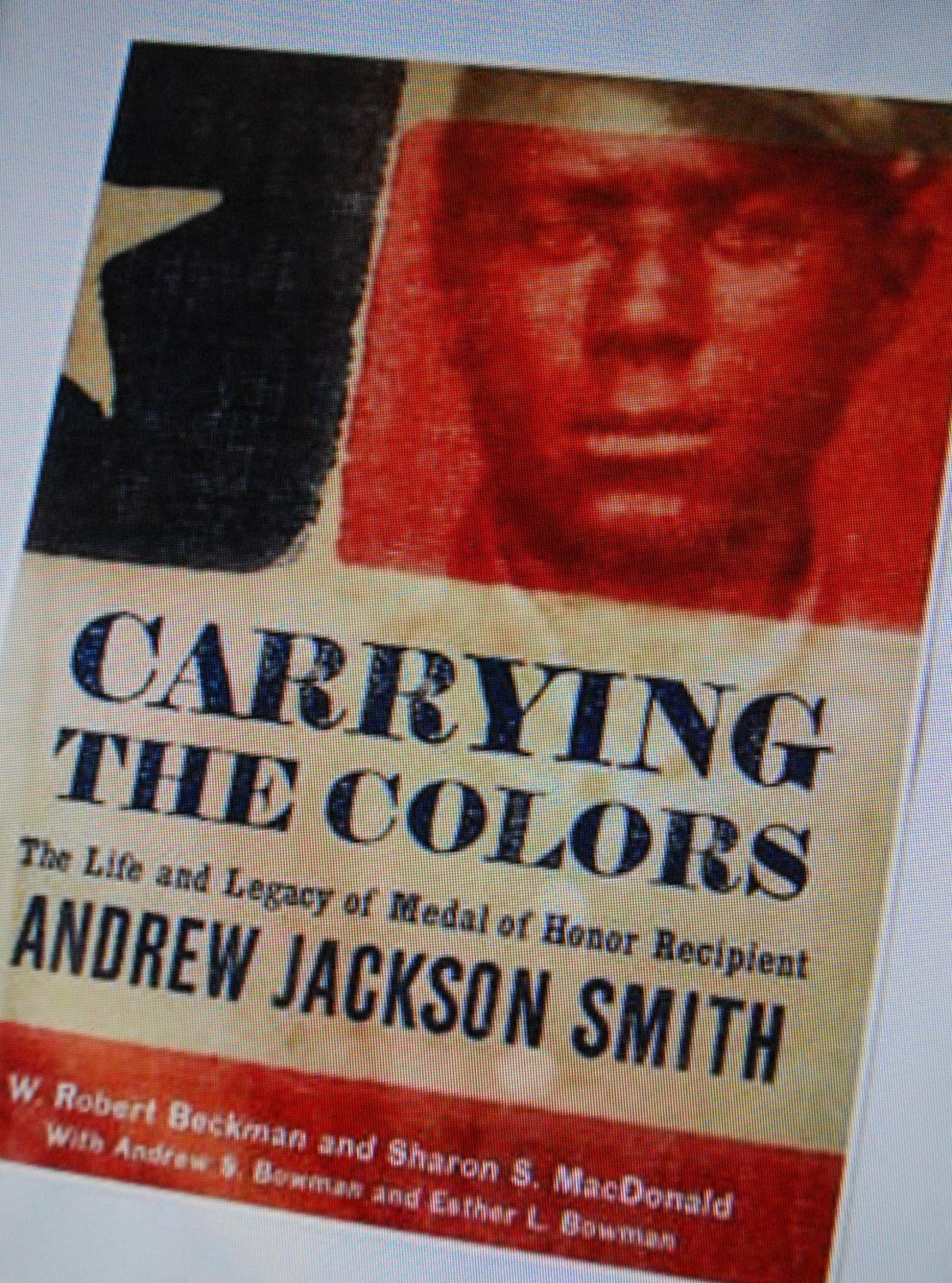 The cover of the new book “Carrying the Colors.”

Andrew Bowman, grandson of Medal of Honor recipient Andrew Jackson Smith, stands beside a black granite monument, with his grandfather’s image and story imprinted on it, two years ago when he visited Lyon County.

The cover of the new book “Carrying the Colors.”

A Lyon County leader thinks a new book about a local Civil War hero is fodder for a movie.

“It would make a perfect movie,” said Judge-Executive Wade White, after he received a copy of “Carrying the Colors — The Life and Legacy of Medal of Honor Recipient Andrew Jackson Smith,” in a brief ceremony at the Veteran’s Plaza in front of the Judicial Center. “I appreciate getting this book; I’ve been looking forward to it since I heard about it. Can you imagine the things that this guy went through and then was able to fight in a war and come back and own land and work and live free? It’s a great American story.”

White was envisioning the hardships Andrew Jackson Smith overcame to become a hero, and for which he was posthumously awarded the Medal of Honor 69 years after his death in 1932. In 2014, Lyon County Fiscal Court, under White’s leadership, erected a black granite monument at the plaza with Smith’s image and his story imprinted on its surface. “I’m so glad we were able to get this monument up,” White said.

The heroism that belatedly earned Smith the Medal of Honor took place on November 30, 1864 during the battle of Honey Hills, South Carolina. Smith deliberately made himself a target of Confederate marksmen to protect his unit’s honor. “During the furious fight, the color bearer was killed, and it was Cpl. Andrew Jackson Smith who retrieved and saved both the federal and state flags,” wrote Union Army Col. Alfred Hartwell in regimental records.

Smith was born Sept. 3, 1842, between the Cumberland and Tennessee in the Bend community. He was the son of his owner, Elias Smith, and a slave woman named Susan. At age 19 Andrew and another slave ran away after overhearing the elder Smith, a Confederate soldier, talking about taking them to fight for the Confederacy. The two men walked 25 miles in a freezing rainstorm to join the 41sts Illinois Regiment at Smithland. He eventually mustered into the 55ththMassachusetts United States Colored Troops.

After the war, Smith returned to Lyon County and used his mustering out pay to buy land in the Bend and eventually accumulated considerable holdings. He married Amanda Young from Young’s Grove. She died in 1901, and three years later he married Gertrude Catlett. He donated land for Oakland (also called Mount Pleasant) Cemetery where he, his mother and other family members are buried.

Efforts to obtain the Medal of Honor for Smith began as early as 1916 by Dr. Burt G. Wilder, professor emeritus of Cornell University and a former medical officer of the 55ththMassachusetts Regiment. “Dr. Wilder submitted his recommendations to the War Department on Dec. 21, 1916,” said the late Ray Parish of Grand Rivers in 2000.

Smith’s daughter, Caruth Smith Washington and his grandson, Andrew S. Bowman tried for years to no avail to have their forbearer recognized. Enter, the book’s authors, Sharon MacDonald and Robert Beckman, Illinois Sen. Dick Durbin, Ray and Shara Parish, and former U.S. Rep. Ed Whitfield. Working together, they located the records in the Library of Congress.

The Parishes accepted Bowman and Washington’s invitation to sit with them when President Bill Clinton presented the nation’s highest honor posthumously to Andrew Jackson Smith in July 2001.

To White: “In appreciation of your accomplishments recognizing the service of Andrew Jackson Smith and all of his fellow Lyon County veterans and thank you for the personal considerations you have extended to the authors.”

To Walker: “In appreciation of your generous cooperation, knowledge and insight that you have extended to us over the past 20 years, you are indeed in the pages of this book and it is our hope that “Carrying the Colors” will help bring your work to a national audience and that those interested in American social history will seek it out and benefit from your work.” Whittington added: “Start reading on page 111.”

To Duff: “In appreciation of the contributions you and others in your office, especially, Sarah DeFew, have made to our research. Lyon County’s records are beautifully preserved, organized and accessible. Furthermore, they are cared for by courteous and helpful individuals appropriately. Andrew Jackson Smith’s life in Kentucky began in the recorder’s office in 2001 and concluded there in 2015.”

The historical society has ordered books and plans to sell then for $30 from its gift shop. Contact Glenda Moore at 270-388-9271.

Duff said she felt honored to received the book. “I helped Ms. MacDonald in the deed room before I became clerk. I was the recorder for the clerk’s office. That was prior to 2016, she was so kind. We were digging into records and she told me then, ‘When I finish this book, I’m going to send you a copy of it.’ So I’m very appreciative of it.”

Walker said Andrew Jackson Smith stood up for what he believed in and proved it. “And for that reason, he stands recognized in the county of Lyon and the state of Kentucky and the nation at large. Even at this delayed time, we all express our great appreciation to him for his contribution to our country.”

“Carrying the Colors” is a remarkable tale of a young man repeatedly demonstrating bravery and determination in the face of danger during wartime,” said Whittington, who also received a signed book. “It is so heartwarming that although he had earned the right to seek a very promising future elsewhere, he chose to return to Lyon County. In like manner, his grandson exhibited that same determination to untiringly pursue the well-deserved recognition of Andrew Jackson Smith as a Medal of Honor recipient.”

Bobbie Foust is a former employee of The Herald Ledger. She can be reached at bobbiefoust@gmail.com.

Bobbie Foust is a former employee of The Herald Ledger. She can be reached at bobbiefoust@gmail.com.