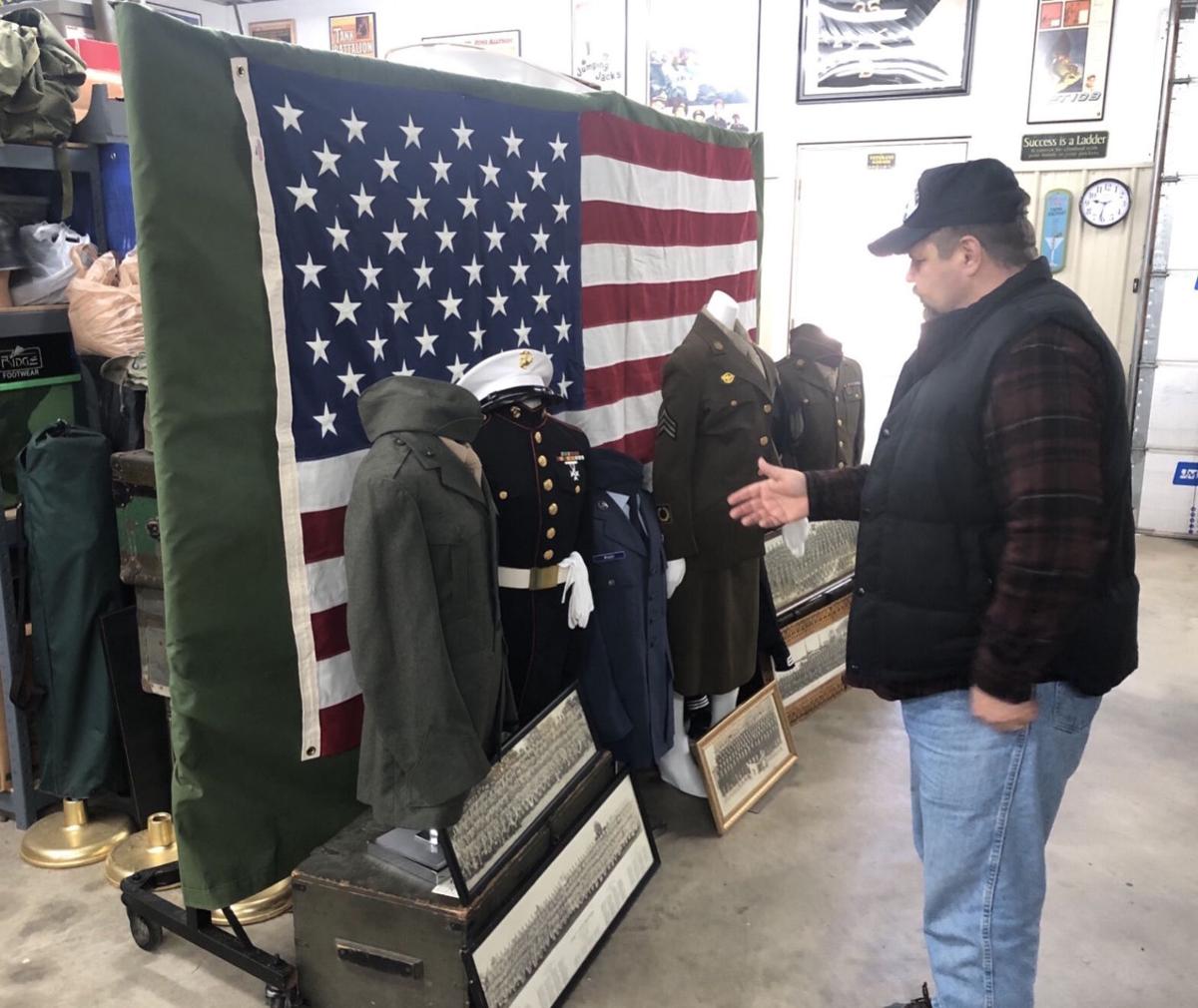 Bob Dymek shows military uniforms he has on display at the GHQ Military Museum in Calloway County for various military branches and war eras. 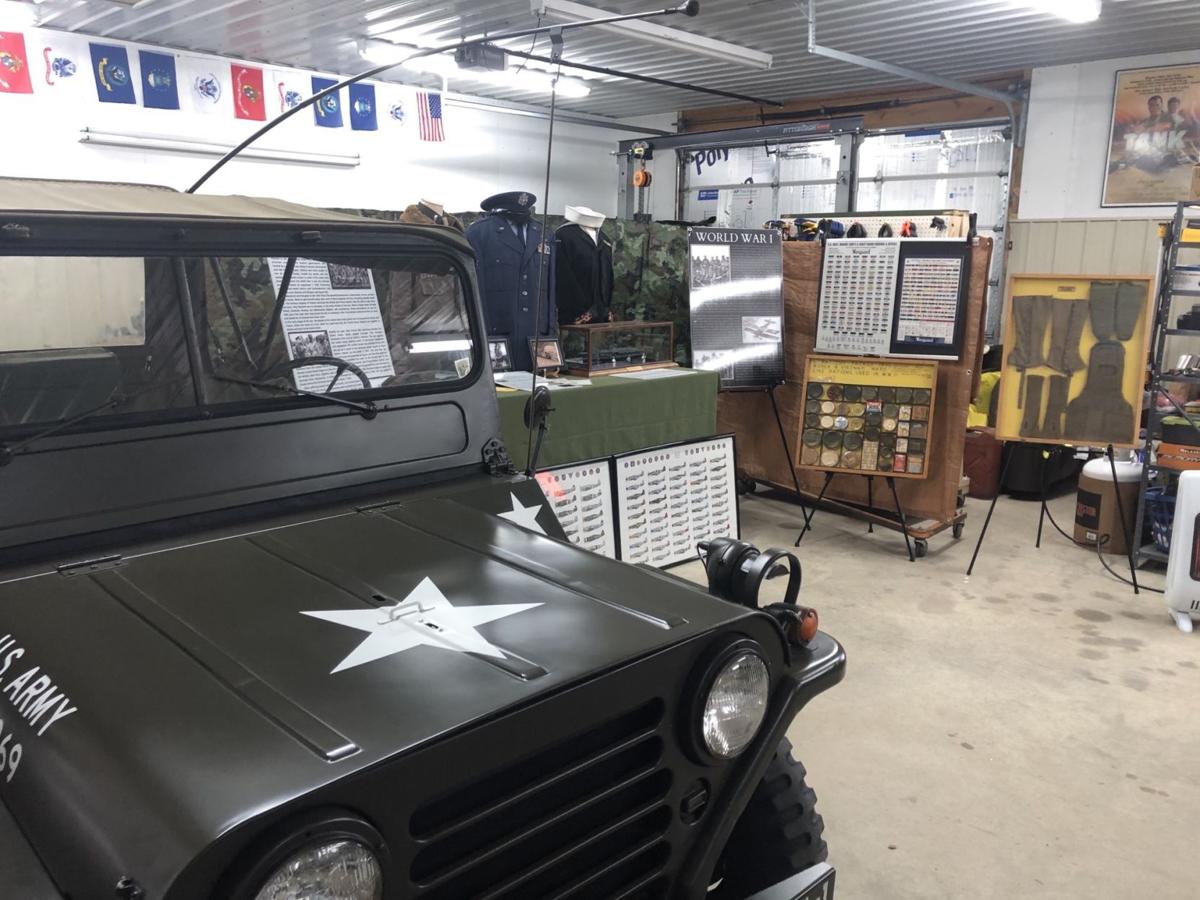 Among the collection displayed at the GHQ Military Museum are various equipment service men and women used during wartime, including a functioning Jeep.

Bob Dymek shows military uniforms he has on display at the GHQ Military Museum in Calloway County for various military branches and war eras.

Among the collection displayed at the GHQ Military Museum are various equipment service men and women used during wartime, including a functioning Jeep.

ALMO, Ky. — Museums can offer a figurative step back in time. Bob Dymek’s does that very thing, even with it being housed in his garage and being a mobile version, as well.

Dymek has a veritable treasure trove of military history in his GHQ Military Museum, located next to his home on Stoneside Drive near Almo in Calloway County. From service pins to a 1966 tactical truck used in the Vietnam War, his collection encompasses United States wars during the 20th century to the present.

Various eras of military dress from across the branches are showcased, as well as patches, communication equipment, models, photos and even write-ups of history about certain individuals, battles and vehicles that Dymek did himself to help bring history to life.

He started the GHQ Military Museum in his native Illinois in 2016 and then moved to west Kentucky last year. A member of the Navy Reserve who later transferred to the Army, Dymek has been a student of history, especially military history, for years.

“I began collecting when I was young, just as a hobby; even writing to all the large military bases in the country asking them to donate patches of the units stationed there. That was when I was in the sixth and seventh grade,” he said. “I would go to flea markets with my grandfather (a World War II veteran) and find military items.”

But as far as creating a museum, he didn’t give that serious thought until after he served during the Global War on Terror. That’s when he visited area museums and noticed a lack of military history and took it upon himself to begin collecting and displaying what he had.

Along with official military uniforms and photos, Dymek has a display of rations packs from the Korean and Vietnam wars with jellies, crackers, bread, meat, chewing gum and cigarettes. There are letters to loved ones, medals, models of ships and aircraft, and posters from various military movies, including two signed by late actors Ernest Borgnine and Mickey Rooney.

Another display is of a husband and wife who married after WWII; he served as a codebreaker and she was a WAAC (Women’s Army Auxiliary Corps).

People can visit and walk through the exhibits, or Dymek can take many of them on the road to show for schools, churches, care facilities, and historic or veteran’s organizations.

Being mobile, he said, keeps costs down and also allows history to be presented to those who may not be able to travel. The ability to share U.S. history is at the core of the GHQ Military Museum.

“Because of history, we learn about what was good and what not to repeat from the past. Our military history shows us that the freedoms we have now have never been ‘free,’ ” Dymek added. “We enjoy it today because of those who were and are currently willing to fight and die to ensure it continues for future generations. Many of our displays are detailed stories and events of veterans who helped provide that freedom.”

Sadly, he said, a great deal of history is simply being discarded by family members of veterans who have passed away. Dymek explained some family do not know where to donate items such as uniforms or medals and may leave them in a trash can to be thrown away. That is another reason he created the museum and accepts donated veteran items.

Like most other businesses or organizations, museums were also hit hard by the COVID-19 pandemic. Many museums have or are facing closure. Being smaller has helped, but Dymek said they are continually seeking financial donations and any grant opportunities to stay open and also purchase materials to build additional display cases, purchase storage cabinets, or military items.

The museum is a 501©(3) non-profit and donations are tax-deductible. For additional information, visit the GHQ website at ghqmilitarymuseum.com or their Facebook page, or call 708-932-6659.