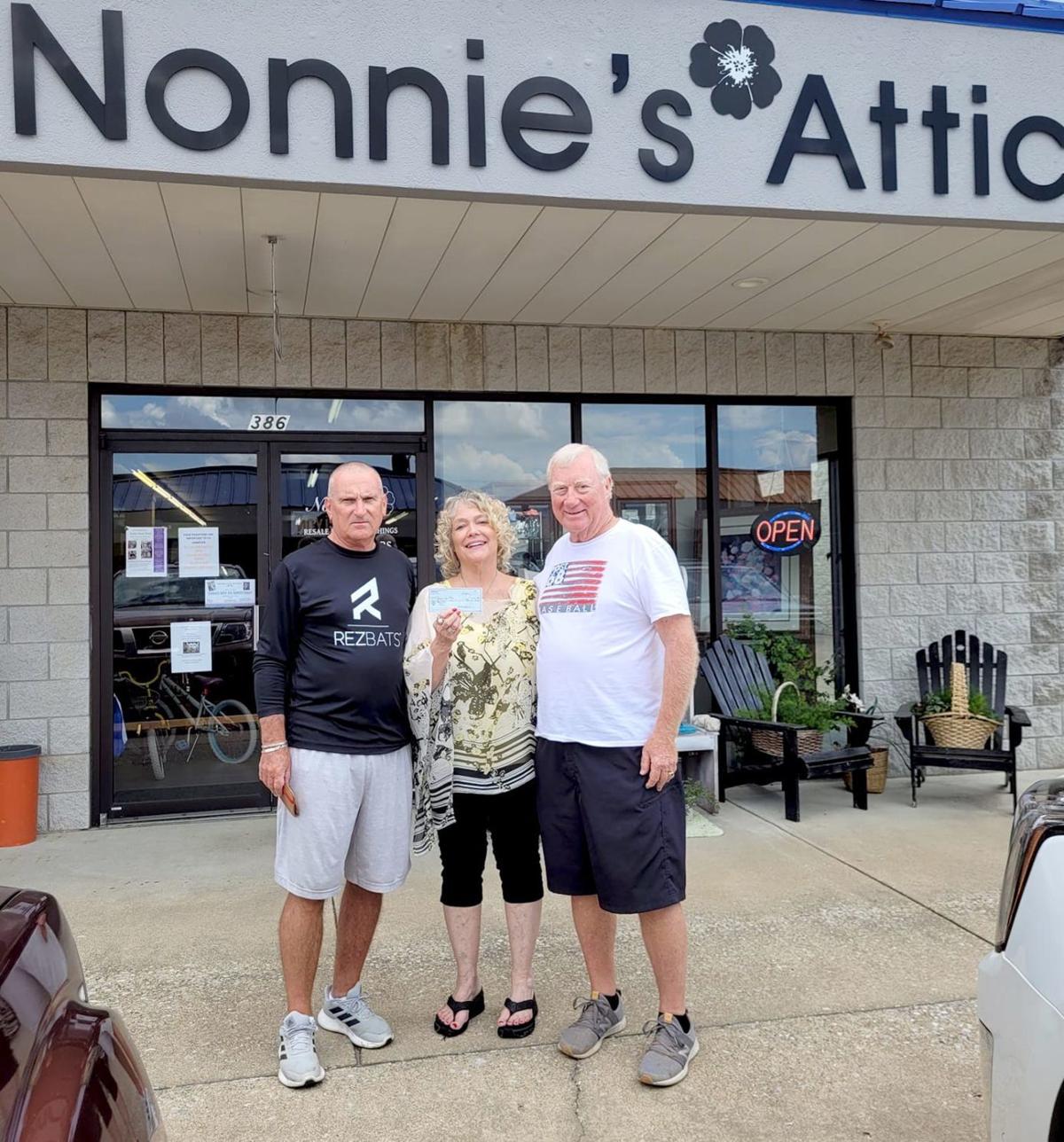 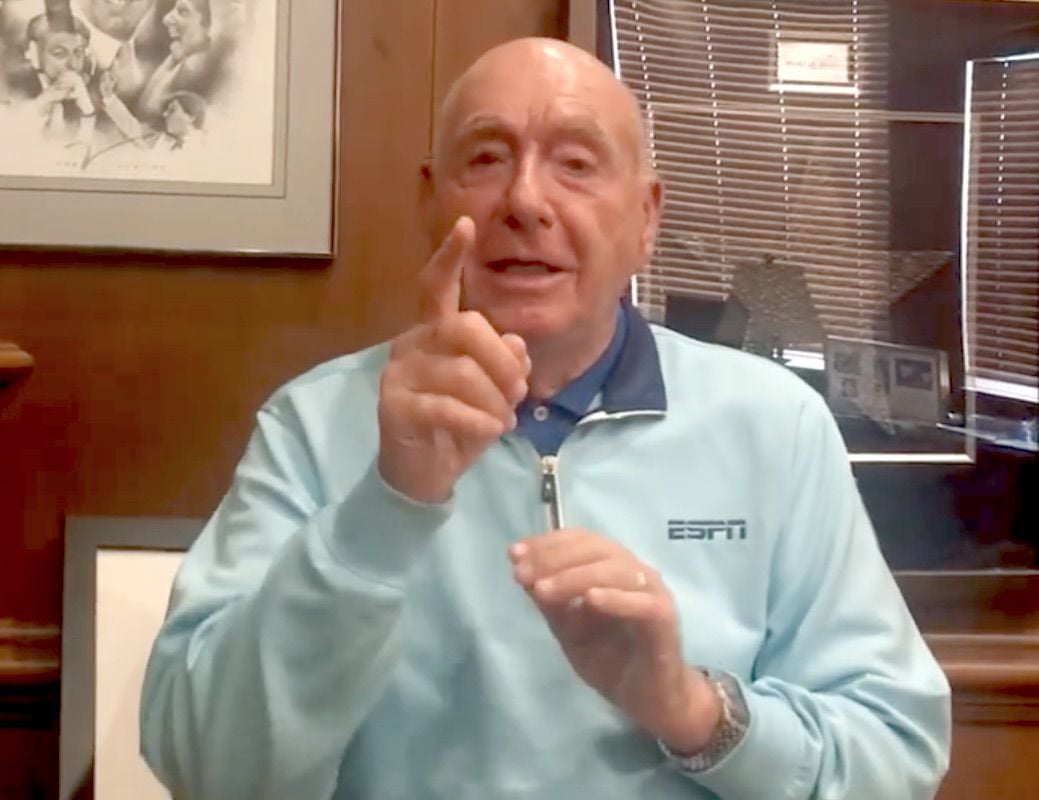 Dick Vitale posted a video to the Post 68 Facebook page to thank them for the $10,000 donation made to the Dick Vitale Fund for Pediatric Cancer through the V Foundation.

Dick Vitale posted a video to the Post 68 Facebook page to thank them for the $10,000 donation made to the Dick Vitale Fund for Pediatric Cancer through the V Foundation.

The Champions Giving Back fundraiser has raised thousands of dollars to be divided among four area charities and the Dick Vitale Fund for Pediatric Cancer through the V Foundation.

Champions Giving Back is a function of the American Legion Post 68 baseball team of Eddyville. It is in its second year of fundraising for local charities.

Other organizations that benefited from the three-month-long effort were the Cullan Brown Foundation, Lara’s Celebration, Nonnie’s Place and the Wounded Warrior Project.

Post 68 head coach Greg Vincent coordinated the fundraiser. In its first year last year, the team raised $22,000 for the family of Owen Matthews, an Eddyville youth who died last November from a rare form of cancer.

Vincent said the final tally from this year’s effort is still incomplete.

“We are still waiting on money to come in from different people that have pledged money to us,” he said. “I would say that we’re going to be somewhere around $70,000.”

Lara’s Celebration and Nonnie’s Place have each already received two checks through the fundraiser, and the Wounded Warriors Project has also received some of the funding.

Vincent said Post 68 received funding, and a check is ready to be given to the Cullan Brown Foundation.

“We’ve disbursed over $35,000 so far to the various charities,” said Post 68 General Manager Bob Harbison. “It was a tremendous effort.”

Vitale was not the only one impressed by the outcome of the fundraiser. Judy Driggers, the chairwoman and CEO of Nonnie’s Place of Eddyville was excited to receive her share.

“I feel like it’s an honor to be in this category with the other people,” she said. “I just appreciate Post 68 for all the work and for caring about homeless women and children.

“That’s what we count on, is the wonderful people from our area supporting our women and children.”

Driggers said the money would be used for feeding and housing of homeless women and children and their day-to-day needs. She added when Christmas comes, the organization gets presents for children.

Vincent called the effort “a labor of love” and said he was pleased with the outcome.

“At times, it’s been frustrating, but I wouldn’t change anything for the world,” he said. “It’s been a pleasure. It’s been an absolute pleasure and a lot of fun. It really has.”

Vincent said many more people were involved in this year’s fundraising effort than last year and credited that to the fundraiser’s success.

“Last year, we put everything together in a two-week period,” he said. “This year, we’ve been working on it since the first of the year. We’ve put a lot more energy into it and time into it, but it’s been wonderful.

“The community has been fantastic in everything they’ve helped us with. It’s been a positive for Post 68, it’s been a positive for the community and I think it shows that we’ve got a lot of great people that — not only can we win a lot of baseball games and win state championships, but when it comes down to it, we can do what we say we’re going to do. We can be champions giving back.”

Deb and Phil Domke of Payroll Vault bolstered the Champions Giving Back cause by making a connection with Staley Payments and auctionfrogs.com, enabling the group to put on an online auction of sports memorabilia and autographed items available to a global audience.

“And then, Alexis George comes along and puts on this golf tournament,” Vincent said. “She did 85 to 90% of the work by herself. She was just fantastic.

“There were so many people getting involved. It’s been a group effort.”

Despite the success of the last two years’ fundraising efforts, the possibility of having a fundraiser in Lyon County next year is in doubt.

“I do not know if I’m going to be in the area any more,” Vincent said, noting he has spent 50 years with American Legion baseball as a player and coach. “I will always have ties to Post 68 because we have built something really special here.

Harbison said there are other reasons for putting a Post 68 fundraiser on hold next year.

“There are a couple of reasons,” he said. “Here in the county, there are a couple of projects that we’d really like to get done with (Lee S. Jones Park in Eddyville). It’s highly utilized by the local residents, and we’d like to enhance that even more.

“We’re talking about a number of things that carry some significant price tags on them. We’re going to be working on some grant money to help out with that, but Champions Giving Back may well take a lead role in fundraising for the park, which would benefit the entire populace of the county.”