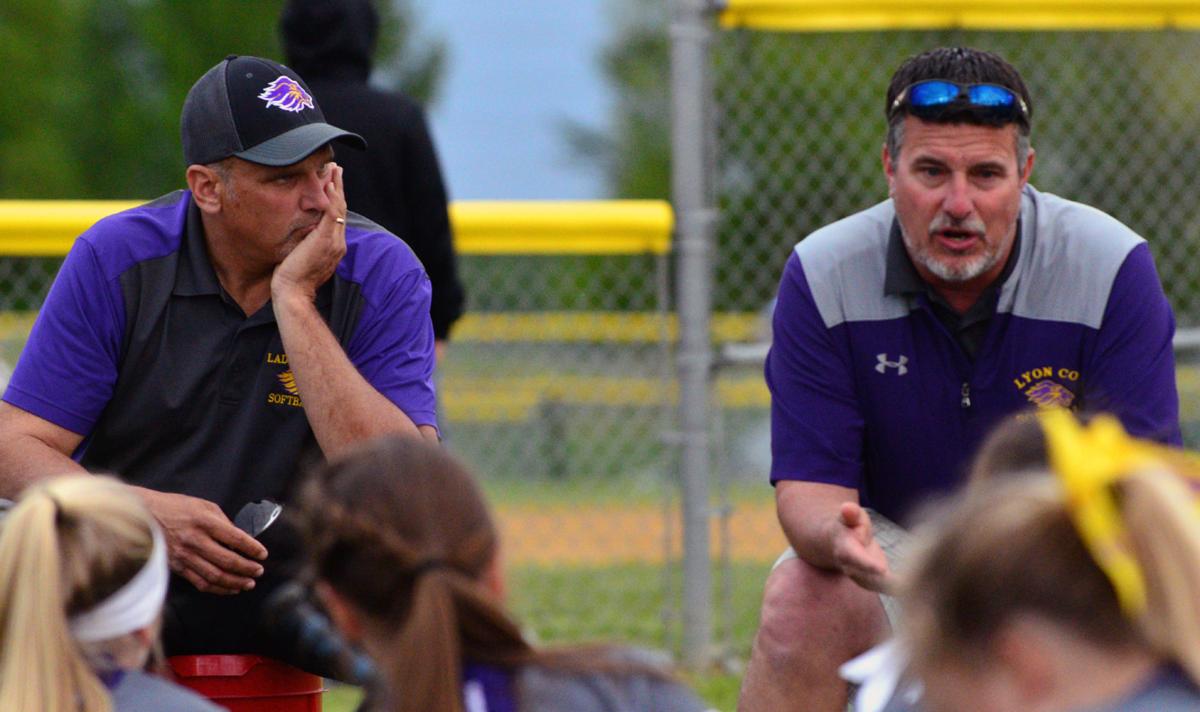 Lyon County softball coach Jason Collins (right) is just like every other skipper in the rest of Kentucky. With spring sports on a health freeze, he’s not allowed to have any significant contact with his team until no earlier than April 12. Meanwhile, the Lady Lyons continue to gather in very small groups, in order to preserve what little season is left. 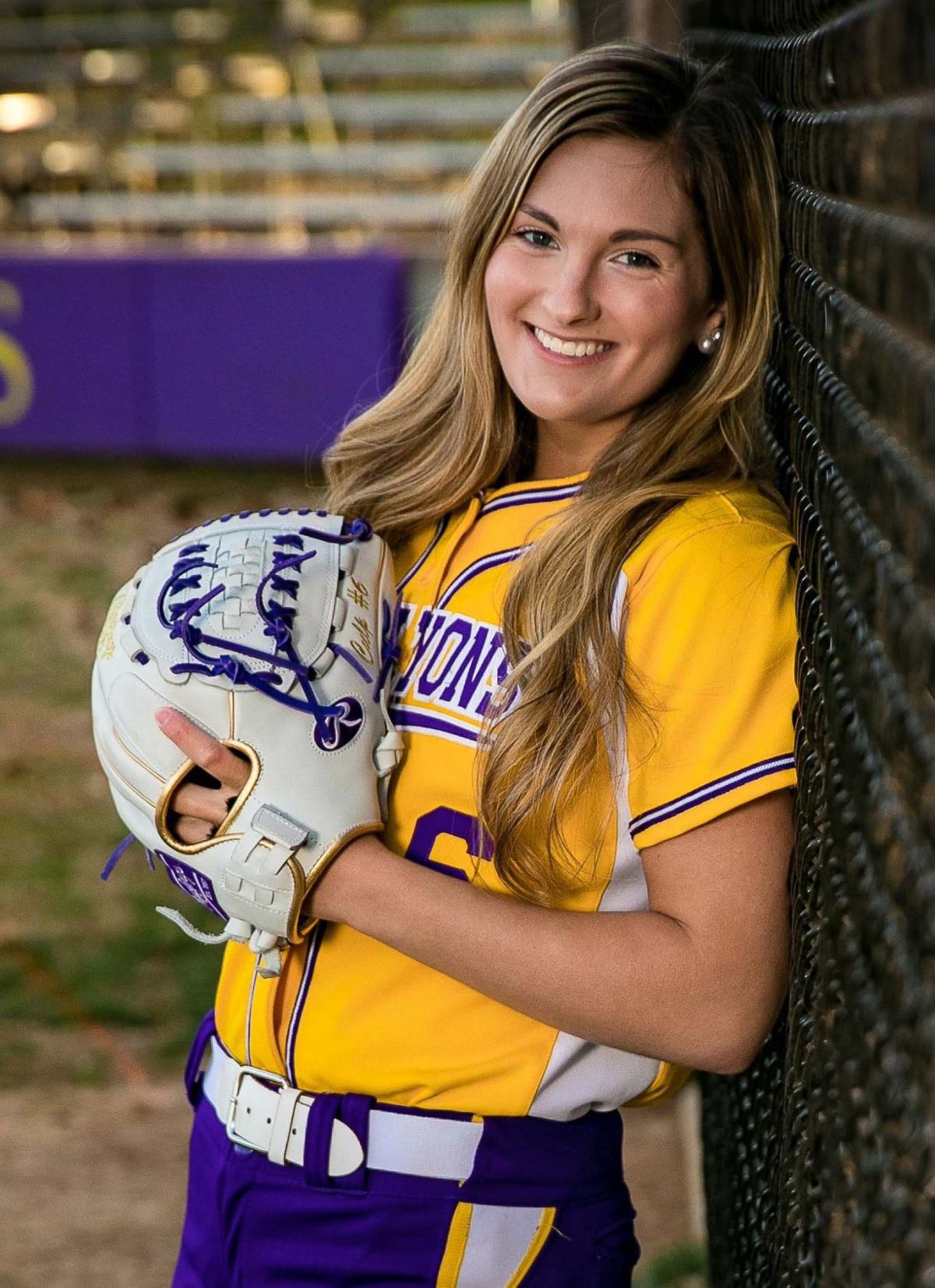 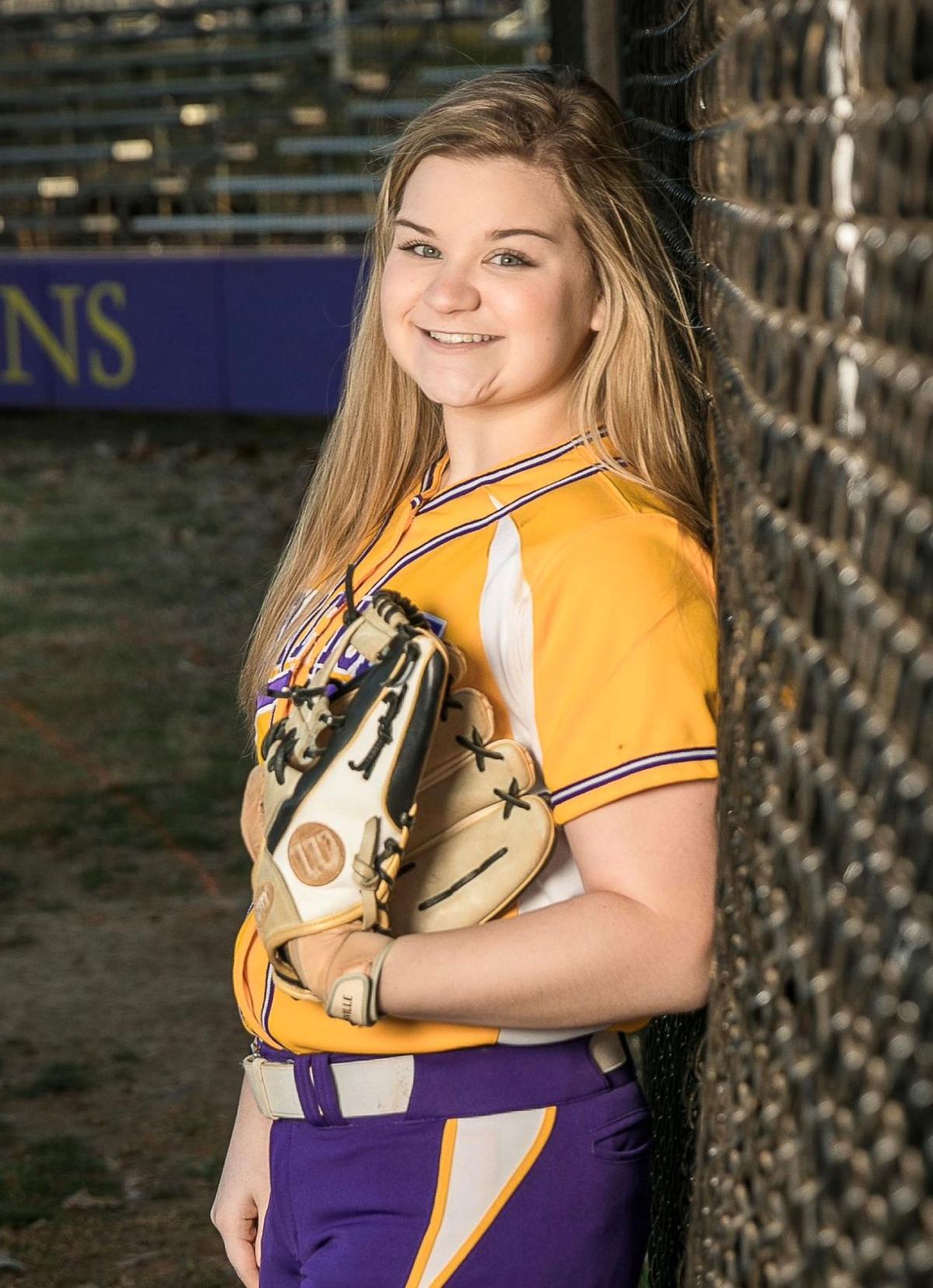 The goals are simple: win the All “A” Second Region Tournament, stay competitive at the All “A” State Tournament, make it back to the Second Region championship, and — perhaps — book a ticket to John Cropp Stadium in Lexington for a chance at a state title. Coach Jason Collins and his staff has made the message clear.

Except the staff — which hasn’t called or texted in earnest for more than two weeks — isn’t at Lee S. Jones Park.

Neither is the bus full of Webster County Lady Trojans, who were supposed to be Lyon County’s opponent at 6 p.m.

Instead, only six Lady Lyons are at a non-mandatory practice — three on one field, three on another field — as social distancing and a stymied season rule the day-to-day operations of all high school sports in Kentucky, due to the untimely, unruly, but well-documented spread of COVID-19 (“coronavirus”).

Since the KHSAA came down with its halt of spring sports to no earlier than April 12 (and possibly longer), the Lady Lyons have tried to maintain player-organized practices twice a week. Incessant rains have limited those hopes further.

They’ve been obeying Kentucky Gov. Andy Beshear’s strongly-worded suggestions, too, keeping a distance when meeting, and keeping the total group to 10 or fewer players overall, and the practice squads to five or fewer players on the diamond at a time. To the point where bat bags are being kept outside of the dugouts.

They know they’re lucky, with the fields they practice on not owned by the shut-down Lyon County school system and its properties.

But they also know time is of the essence, and it might just be running out on both these private sessions, and the 2020 softball season itself.

“For me, just knowing that they (the KHSAA) haven’t even canceled the basketball state tournaments yet, there’s still definitely some hope there,” Culp noted. “I’ve definitely cried a lot over it. I’m trying not to think about it, but at the same time, I have to be real. I have to prepare myself for it, if it does happen. I’ve definitely thought about it. It’s been hard. It’s been, what? Two, maybe three weeks now? I’ve kind of come to terms with it, but if I do get that final say that ‘it’s over,’ it’s still going to be very hard.”

Added Walker: “I’m not doing well. I’ve just been playing all my life, and softball has been my go-to thing. There’s still travel ball that I can play this summer, but I was hoping to end my softball career on a high note, because of so much that this team is going to accomplish.

“I want to keep the memory of this team alive. I’m not sure what I’m going to do. It’s hard to think about.”

Undoubtedly, Lyon County’s strength is its junior class, which consists of Collins (bound for Rutgers), Melton (bound for Southeast Missouri State), Conger (who went 11-3 with two saves and a team-best 3.22 ERA in ‘19), Tori Schenk (a late-season pitching surprise in ‘19), Rachel Coursey and the Craft twins (Kerstin and Kyra).

They’ve got more time in the bank.

But the two seniors? Yeah, this might be it.

Culp — a Lady Lyon since her freshman season after transferring from Marshall County — pitched a team-high 105 innings last season, going 13-4 with 100 strikeouts, 30 walks and 3.33 ERA.

In her downtime this past weekend, she and her family built a pitching mound out of sand, just to stay fresh. Just to stay out of the mud.

“Just trying to do everything we can,” she said.

Walker — a Lady Lyon for the past two seasons after transferring from McCracken County — finished fourth on the team in hits (26) in 2019 with one home run, six doubles and a .274 batting average.

She’s been taking these little get-togethers seriously, too, if only for the social connection right now.

“These practices do just help, just trying to get to talk to everybody,” she said. “Half of it has been instructions and just doing fundamentals, but the other half of it has just been talking to each other. I will say that this team has a lot of heart and loves each other, and I think that’s what makes us play so well.”

In order to uphold the in-place dead period from the KHSAA, coach Jason Collins told his daughter, Calista, that he “didn’t want to know what the players were doing” during this off-time. It’s an extremely tough line to toe.

And, so, he doesn’t know...even though they live together.

“(Calista) asked me, as soon as this happened, ‘What can we do? And what can we not do?’ ” Collins remembered. “I told her then: ‘The rules that apply to y’all are the rules that apply to the public. No one can tell y’all not to get together and do what you’re doing.’ But I said: ‘I can’t talk to you about it. I don’t need to know about. I don’t want to know about. I’m not going to have any input about it.’

Like his players, Collins is holding out the slim hope of a truncated season. Maybe no out-of-state games. Maybe district games only. Maybe an unseeded district tournament, or an unseeded regional battle. Something. Anything.

But “nothing” remains a very clear possibility, and at this point, Collins is finding a silver lining, in the fact his players are working through these difficult times both at home, and with each other.

“I guess it’s forcing them to maybe take a different role than maybe they’re used to taking,” he said. “That’s probably a good thing that may come out of that. It is, for sure, good to know we’ve got leaders.”