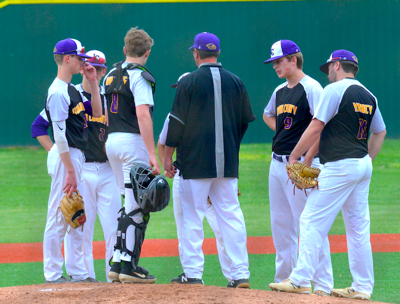 Brody Williams’ top baseball memory this season might be his first-pitch home run off of teammate Jackson Shoulders in an intrasquad scrimmage earlier this spring.

If the ongoing COVID-19 pandemic — and subsequent KHSAA hiatus — continues to disrupt the sports world as it has the last month, it might be one of the only moments for Lyon County’s baseball team, which was hoping to build off of its first-ever trip to — and first-ever win at — the All “A” state tournament in Owensboro last year.

For Shoulders, a sophomore who was 5-3 with a 2.93 ERA, 51 strikeouts and 17 walks in 59 2/3 innings last year and has excelled both on the diamond and on the basketball court for Lyon, the 2020 season was to be another step forward.

“Everybody was getting hyped up and ready to go,” said Shoulders, who also hit .315 with four home runs, four doubles, a triple and 17 RBIs for the Lyons. “The basketball players were getting back in sync with what we were doing, getting a lot of reps and feeling really good about where we were. It’s still up in the air whether we’re getting to play or not, but that month would’ve helped us coming off of basketball even more.”

Still, though, the Lyons are trying to stay prepared.

“I don’t know what else to do other than to keep working on it,” said Williams, who hit .298 with four doubles and 15 RBIs as a freshman last year. “Hopefully, we’ll get to play sometime. I was pretty confident. We’d all been hitting good and had a few chances to be out on the field. We all looked pretty good, so I was looking forward to it.”

And, work on it, the Lyons are.

Team-organized activities are out — a mandate of the KHSAA’s rapidly-instituted dead period two weeks ago, and until further notice. But the guys are able to do things on their own time, usually once their schoolwork is caught up for the day.

And, with no seniors on this team, it’s been up to everyone to hold his teammates accountable.

“We as a team take leadership,” Shoulders explained. “A lot of feelings get hurt especially if, say, a sophomore is trying to override a junior. So, we just collectively decided that everybody needs to hold each other accountable. There’s not going to be one guy who starts trying to run the show.”

For skipper Ricky Baker, this ongoing crisis has given an opportunity for his team to learn how to handle adversity and put things into greater perspective.

“First and foremost what we told them is how important it is,” Baker said. “Sports is something we love. Baseball is definitely a game we love, but with the severity of what’s going on and what’s happening in the world, taking a step back from baseball puts everything in perspective of how important life is, how important family is and your relationship with God.

“We keep telling them to be ready at the drop of a hat. At any moment, after the dead period, they can say the season’s off, and we can’t look down on ourselves if that happens, and get discouraged. We’ve just got to keep working for the next season. Hopefully, it doesn’t come to that. If we play eight, 10 games before districts, that’s what we’ll be happy with. It’s (the break) a much-needed thing right now. It’s about the safety of the community and everybody in the world.”