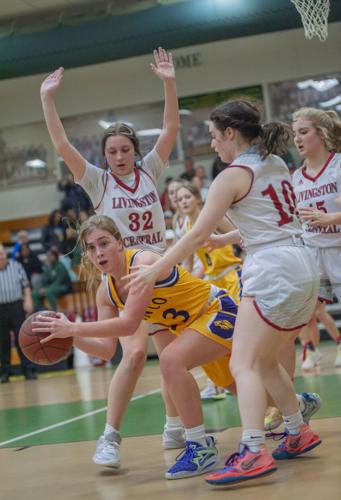 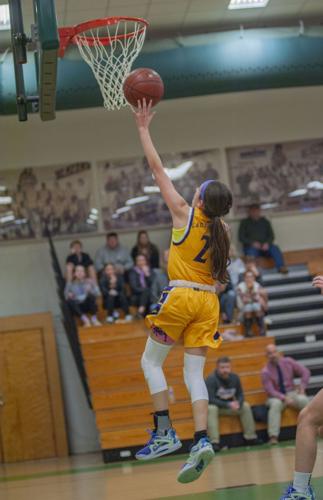 Lyon County's Piper Cotham drives to the basket in their contest against Livingston Central.

Lyon County's Piper Cotham drives to the basket in their contest against Livingston Central.

The Livingston Central Lady Cardinals pulled off a 56-49 upset over the Lyon County Lady Lyons on Thursday night, Jan. 12 in the semifinal round of the Second Region All “A” Classic at host site University Heights Academy.

A 3-pointer from Lexi Holland capped off the first quarter with the Lady Lyons leading 15-8. Courtney Collins opened the second quarter with a five-foot runner to extend that lead to 17-8. As the Lady Lyons were on the verge of a double-digit lead, Victoria Joiner was sent to the line twice where she shot 4-for-4 from the line. Joiner’s free throws, plus a backdoor basket from Emersyn Ramage cut the Lady Lyons’ lead to a single point, 17-16.

Ramage tried the backdoor trick again, but was fouled. She gave the Lady Cardinals the 18-17 lead when she hit both charity tosses. Piper Cotham drove the lane to put Lyon back on top at 19-18, but it didn’t last long. Livingston used a 7-0 run to take the 25-19 advantage heading into halftime.

A basket from Joiner at the 2:25 mark in the third quarter gave the Lady Cardinals a 30-20 advantage. A combined effort from Cotham, Ella DeFew and a stolen ball by Trinity Taylor with a breakaway basket cut the gap to 30-26. But almost as quickly as Lyon would trim the lead back, a miscommunication on the defensive end would have the Lady Lyons back where they started.

After mounting up a double-digit lead once again, a lay up from Taylor with 10 seconds left in the quarter cut the lead to a more manageable 38-30.

DeFew opened the final frame with an and-1, which was followed by a five-foot runner from Holland to make it 38-35 in favor of Livingston Central. A basket from Taylor at 5:26 left cut the lead back to 41-40. The final four minutes were mainly spent at the free throw line with just a point or two separating the teams.

DeFew tied the game 46-46, hitting both free throws with 2:17 left. Hadley Hargrove put up three points on an and-1, but Cotham fired back a deep ball to tie things up once again 49-49 just seconds later. An unnecessary foul on Joiner tipped the game in Livingston’s favor as she hit both shots, forcing the Lady Lyons to foul to stop the clock.

Livingston delivered 7-of-8 free throws in the final two minutes to take the win. Livingston hit 20-of-35 free throws on the night. Lyon just didn’t have as many opportunities shooting 8-for-13 on the night with DeFew leading the way, shooting 6-for-8.

Livingston’s Joiner led all scorers with 25 points and Ramage finished with 18 points.