Lyon County’s Lilly Perry makes the throw from third against Murray on Saturday, April 9 during the Murray Spring Break Bash. The Lady Lyons won 8-6 over the Murray Lady Tigers. 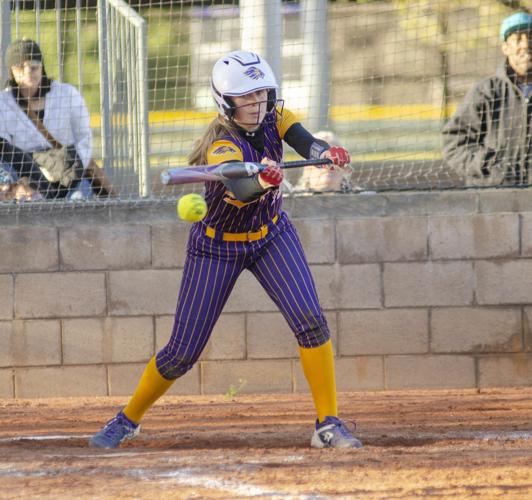 Lyon County's Courtney Collins lays down a bunt against Russellville on Saturday, April 9 in Murray. Russellville won the game 9-1.

Lyon County’s Lilly Perry makes the throw from third against Murray on Saturday, April 9 during the Murray Spring Break Bash. The Lady Lyons won 8-6 over the Murray Lady Tigers.

Lyon County's Courtney Collins lays down a bunt against Russellville on Saturday, April 9 in Murray. Russellville won the game 9-1.

MURRAY — Heavy rain forced the Murray Spring Break Bash to move things around and cram two days worth of softball into one action packed Saturday. The early morning rain on Saturday, April 9 caused another scheduling nightmare forcing coordinators to cut games and invoke a 75 minute time limit making for some interesting outcomes in the spring break showdown.

The Lady Lyons started the day with a 8-6 win over the Murray Lady Tigers, but fell to Russellville 9-1 in the next round.

The Lady Lyons struck early in the first inning against Murray with Calista Collins sending one out of Central Park. Hadlie Butler turned a walk into a run after two stolen bases and Courtney Collins bunt to the circle for a 2-0 lead. Courtney Collins then scored herself on a passed ball at home for the 3-0 advantage. Lauren Davis followed her lead and laid a bunt down in the same place advancing to first. One stolen bag later, Davis was on second and headed home after Emma West’s single to second gave the Lady Lyons the early 4-0 lead.

Murray added just one run in the bottom of the first with Lilly Perry in the circle. A mistake in right field and a passed ball at the plate would result in one run scored before Calista Collins snagged Aiden Farr’s shot to short to end the inning at 4-1.

Lyon squandered both chances for runs in the top of the second and third. Jenna Coursey landed a fly ball in center field, but was left on the bag.

Murray tied things up 4-4 in the bottom of the fourth after multiple Lady Tigers knocked back-to-back balls into the outfield.

With time looming, the Lady Lyons used a big fifth inning to take the lead for good. With bases loaded and two outs, Davis was hit by a pitch, walking Calista Collins to give Lyon County the lead. Emma West earned three RBIs with a hard ball deep into center to finish out the inning with the Lady Lyons ahead 8-4. Murray put up two more runs in the bottom of the innings, but Jenna Stone’s ground out to first and marked the third out just as time ran out.

Calista Collins and West were both 2-for-3 from the plate with doubles to lead the Lyon County offense. Collins finished with two runs and a RBI, while West stacked up four RBIs.

Lyon County put the first run on the board against Russellville when Calista Collins was walked and scored on Butler’s bunt. West held off the Lady Panthers from the circle in just three batters.

Coursey kicked off the top of the second with a double on 3-2 count followed by Davis’ single line drive past Lady Panther pitcher Amaya Collier. After Coursey was questionably picked off at third and West fell victim to Collier’s ball, the top of the inning was over.

A series of errors and heavy hitting to a struggling outfield allowed the Lady Panthers to stack up eight runs before the Lady Lyons finally shut it down. The first inning run was all the Lady Lyons managed, while Russellville added one in the bottom of the third thanks to Collier’s triple to right field, scoring Akiah Bell. Time was called after just five innings with neither team making headway in the final two stanzas.

West, Butler, Davis and Coursey had a hit a piece with West and Coursey both hitting doubles.