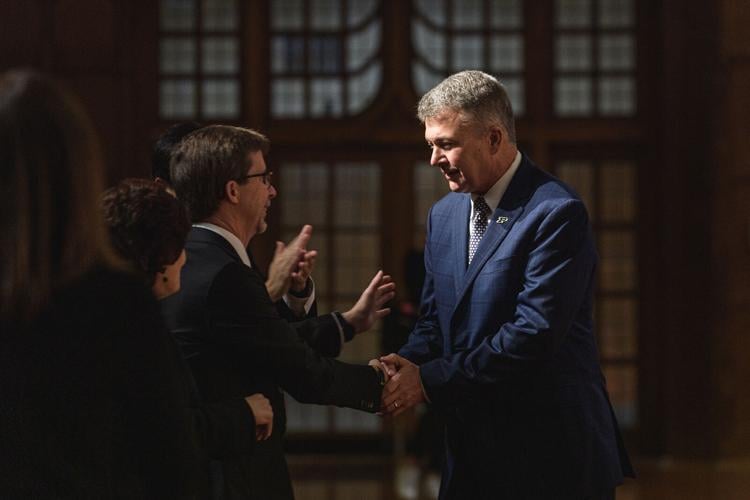 Outgoing Purdue University Provost Jay Akridge shakes hands with Peter Hollenbeck, vice provost for faculty affairs, during a celebration to wish Akridge “all the best” at the North and South ballrooms of the Purdue Memorial Union. 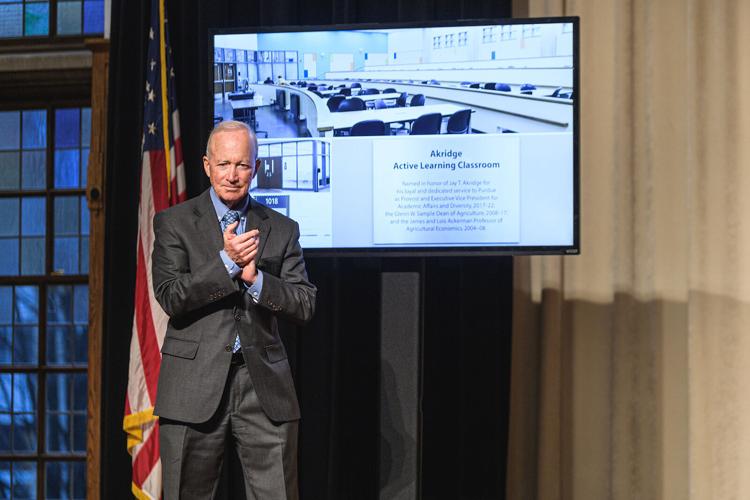 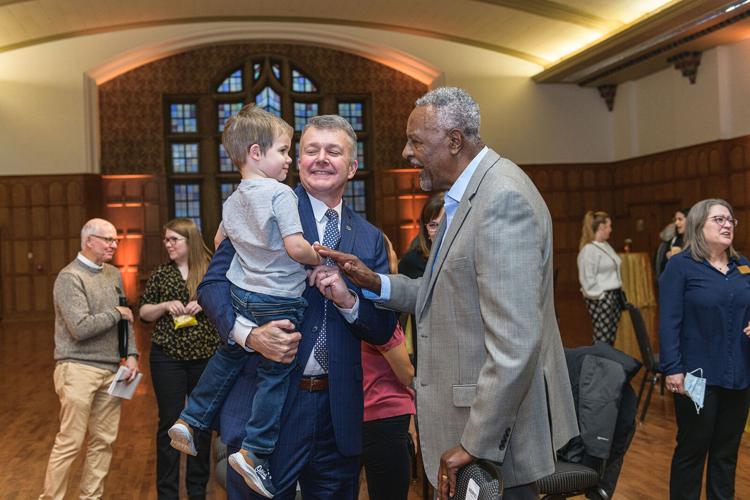 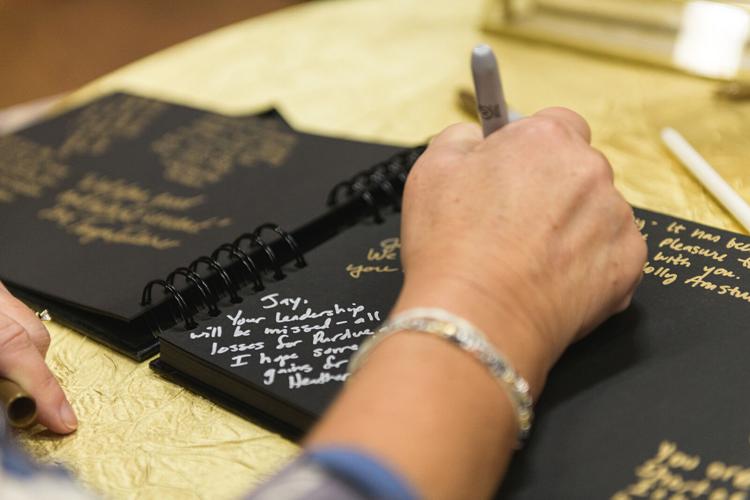 A guest at the reception for outgoing Provost Jay Akridge writes a message in a book of well wishes during a reception for Akridge. Akridge is stepping away from his role as chief academic officer to return to teaching.

Outgoing Purdue University Provost Jay Akridge shakes hands with Peter Hollenbeck, vice provost for faculty affairs, during a celebration to wish Akridge “all the best” at the North and South ballrooms of the Purdue Memorial Union.

A guest at the reception for outgoing Provost Jay Akridge writes a message in a book of well wishes during a reception for Akridge. Akridge is stepping away from his role as chief academic officer to return to teaching.

EDITOR’S NOTE: The following article was originally published by Purdue University at purdue.edu and is being used with permission. Jay Akridge is a member of the Akridge family that owns Akridge’s Farm Supply/Ace Hardware in both Fredonia and Eddyville and grew up in the local community.

“This land-grant mandate to do work that matters, that has measurable impact, with terrific colleagues who are just as passionate as I am, has made my career in higher education at Purdue professionally and personally rewarding beyond my wildest expectations.” — Provost Jay Akridge

To outgoing Purdue University Provost Jay Akridge, these words define what he says directed the priorities, the purpose, the persistent pursuits during his 5½-year tenure as the university’s chief academic officer.

It’s what motivated Akridge as he helped guide Purdue in its ongoing quest to deliver higher education at the highest proven value as the state’s land-grant university, with a mission focused on learning, discovery and engagement.

And it’s what has underscored an accomplished and impressive 40-year academic career — first as an agricultural economics professor, then as an agribusiness center director, then as dean of the College of Agriculture, and most recently as provost.

At four decades and counting, this native Kentuckian has spent all of his professional career as a Boilermaker.

Currently the Big Ten’s longest-serving provost (since July 2017), Akridge will transition to his faculty responsibilities at the end of the calendar year. Following a planned sabbatical, he will return to the College of Agriculture in agricultural economics, where he began his Purdue journey as a master’s student in 1982.

“Jay has been an outstanding provost and my closest partner, fully dedicated to the success of this institution and its faculty, staff and students,” Purdue President Mitch Daniels said.

“We are grateful for Jay’s loyal and excellent service in perhaps the most strenuous and taxing job on campus, for his selfless devotion and commitment to the common good. I’ll especially remember his indispensable efforts through the pandemic and his leadership in our growth as a 21st century land-grant institution. He has left so many tangible programs and intangible imprints all across this university. Jay has given Purdue more than 40 years of great service, and we look forward to many more.”

The Purdue community honored Akridge on Wednesday (Dec. 14) for his lengthy list of academic accomplishments and storied administrative career, including as provost during much of Daniels’ tenure. Among those joining President Daniels with remarks at the reception were President-elect Mung Chiang and Peter Hollenbeck, vice provost for faculty affairs. Wrapping up the formal portion of the ceremony, Karen Plaut, the Glenn W. Sample Dean of the College of Agriculture, welcomed Akridge’s return to teaching in Purdue’s College of Agriculture.

In recognition of his many contributions as Purdue’s chief academic officer, the Board of Trustees on Dec. 2 named Akridge the Trustees Chair of Teaching and Learning. And at last Wednesday’s reception, Daniels announced that Room 1018 in the Thomas S. and Harvey D. Wilmeth Active Learning Center (WALC) will be renamed the Akridge Active Learning Classroom. Opened in 2017, WALC is emblematic of Akridge’s commitment as provost to an increased, focused excellence in teaching and learning.

“Jay has been and will continue to be an extremely valued colleague at Purdue, and recognizing his extraordinary leadership as provost and as a pioneering, creative and outstanding teacher is most fitting,” President-elect Chiang said.

“I thank him deeply for his vital contributions in so many ways to our university throughout the past four decades. He leads with integrity, humility and grace. He is a role model for many of us, and I look forward to many successful future collaborations with him.”

Akridge’s successor is expected to be announced later this month.

Akridge has led academic enterprise with a total budget of $1.8 billion, enrollment of over 50,000 students, and 2,700 faculty members and 8,000 staff. As Purdue’s chief academic officer, he has responsibility for all academic programs; academic strategy and priorities; faculty-related matters; student academic/co-curricular activities; student success; diversity, inclusion and belonging initiatives and engagement.

“Jay arrives at this day with a long history of Purdue leadership, a career arc marked by selfless and effective work to catalyze the success of Purdue — its faculty, students and staff,” Hollenbeck said. “I think of Jay as the Swiss Army knife of Purdue leaders. Which is to say, Jay Akridge has never missed an opportunity to contribute to the progress and the excellence of this university.”

The highlights of the Akridge era as provost are lengthy, impactful and record-setting on several essential and strategic fronts:

“It has been a rare privilege to serve as provost at Purdue, working with President Daniels and our board of trustees during one of the most dynamic periods in our university’s history,” Akridge said. “This university has given this kid from Kentucky more opportunities than I could have ever dreamed possible. I have been humbled daily by the passion, excellence and commitment our faculty, staff and students bring to all they do.

“Our leadership team has never wavered in their focus on our land-grant mission, and they have my deepest thanks. That said, I am looking forward to reengaging in my faculty role and contributing in a different way to teaching and learning excellence at Purdue.”

Akridge previously served for more than eight years as the Glenn W. Sample Dean of Agriculture, leading the college’s academic, research, Extension and international programs. He also served as Purdue’s interim vice provost for engagement in 2007-08 and as interim dean of agriculture in 2008-09.

Before moving into administration, he was the James and Lois Ackerman Professor of Agricultural Economics and director of the Center for Food and Agricultural Business and the MS-MBA in Food and Agribusiness Management program. As an instructor, Akridge received Purdue’s Charles Murphy Award for Distinguished Undergraduate Teaching, is listed in Purdue’s Book of Great Teachers and was named a University Faculty Scholar.

He earned his master’s degree and doctorate in agricultural economics from Purdue and his bachelor’s degree — a double major in agriculture and business administration — in 1982 from Murray State University in Kentucky. Akridge’s family owns and operates a retail farm supply business in Fredonia, Kentucky.

“Over my own career, I have been blessed with many opportunities to do good work, with good people” Hollenbeck added. “But the highlight for me will always be that I have had the opportunity, for a number of years, to work with Jay Akridge — to help fulfill his vision for the success of Purdue, and to be inspired and schooled by his purposefulness, by his integrity, and by his compassion.”

Commitment. Sincerity. Authentic. Listener. Kindness. Steady. Patient. Empowering. Selfless. Compassion. Trustworthy. Those are the words, the virtues, the characteristics that came to mind when the deans from across Purdue’s 12 academic colleges were asked to describe Akridge as provost.

“Jay has an unparalleled commitment to people — listening to everyone making sure they feel like they are the most important person in the room,” said Plaut, who was recruited to Purdue by Akridge in 2009 while he was Ag dean. “His commitment extends to his love of Purdue University — always looking out for what is good for the person and also a win for Purdue.

“And the traits that made Jay an excellent provost make him a great faculty member. His commitment to teaching and learning innovation, his ability to listen and work with others, his knowledge and experience in leadership is something we treasure.”