Search and rescue efforts continue on Monday at the site of the Mayfield Consumer Products Candle Factory. 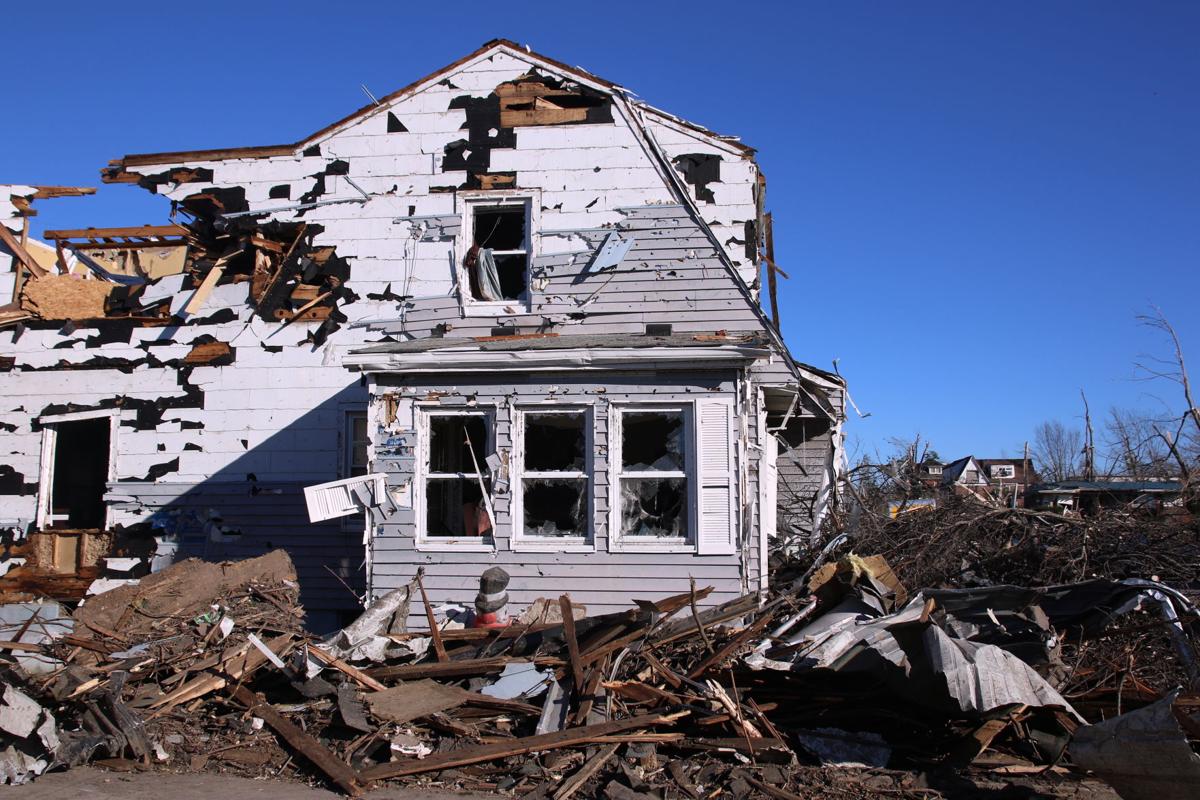 Tornadoes that hit Kentucky destroyed homes throughout the state, including this home in Mayfield.

Search and rescue efforts continue on Monday at the site of the Mayfield Consumer Products Candle Factory.

Tornadoes that hit Kentucky destroyed homes throughout the state, including this home in Mayfield.

The governor reported that 21 people are dead in Graves County, 17 in Hopkins County, 11 in Muhlenberg County, 15 in Warren County, four in Caldwell County, and one death reported each in Marshall, Taylor, Fulton, Franklin and Lyon Counties. Beshear said it could take weeks before the state is able to report a final death toll. Kentuckians who died from severe weather damage range in age from 5 months old to older than 80 years.

Beshear said there are 109 Kentuckians who remain unaccounted for. This situation is still fluid, as families and friends are still reporting loved ones as missing, and recovery crews are still working through debris and rubble.

Kentucky National Guard has deployed 448 Guardsmen throughout the state to assist with recovery efforts.

Kentucky State Police is directing people who are looking for missing loved ones especially in the Graves County area to His House Ministries, 1250 KY-303 in Mayfield. Loved ones are asked to provide photos and information that will help identify missing people. Family members can provide a DNA sample to help first responders match those samples to victims. His House Ministries can be reached at 859-267-7775.

About 30,000 homes are still without power in the state, Beshear said. Kentucky Director of Emergency Operations Michael Dossett said about 95% of potentially impacted power lines have been assessed. An estimated 8,000 power poles are down and will need to be replaced. Agencies are working to deliver more generators to impacted areas.

President Joe Biden is expected to visit Kentucky Wednesday to see the storm damage first-hand, which Beshear described as the “worst tornado event in the history of our commonwealth.” The governor’s office is working with the White House to coordinate the president’s visit.

Beshear said Monday morning his office is “actively working to confirm” the status of 110 factory workers who were working inside the Mayfield Consumer Products Candle Factory the night a tornado hit the factory, causing the building to collapse. MCP representatives said 94 employees are alive, eight employees are dead and eight are unaccounted for, but the governor’s office is still working to confirm those numbers.

All MCP employees are asked to check in at His House Ministries so that an accurate head count of employees whose statuses are known can be taken. Factory employees can also call 888-800-8620 to verify their status.

At least five tornadoes have been confirmed to have hit the state Friday night. The largest tornado, which struck Mayfield and Graves County, hit at least 200 miles in the state, destroying homes throughout the western part of Kentucky. This tornado also tracked through parts of Arkansas, Missouri and Tennessee.

At least 18 counties have sustained damage as a result of tornadoes that hit the state, Beshear said. The federal government has declared a major disaster in Caldwell, Fulton, Graves, Hopkins, Marshall, Muhlenberg, Taylor and Warren Counties.

Kentucky state parks are open to house people who have lost their homes to the tornadoes, and those who avail of this help can stay there for at least two weeks. Beshear said Pennyrile State Park is full, and officials in Graves County are working to move people from warming centers and shelters in the area to Kenlake State Park.

Volunteers will be needed to help staff the state park facilities and help with needs such as washing dishes and doing laundry. Those who wish to volunteer are encouraged to reach out to Andy Kasitz, assistant director of resort parks for Kentucky State Parks, at 502-418-3581 or by email at andy.kasitz@ky.gov. Volunteers are needed at Kenlake, Kentucky Dam Village, Rough River Dam and Lake Barkley State Parks. Volunteers will need to provide their own accommodation.

There is also a general volunteer signup website where people can list their contact information and any skills they possess that may be of use in volunteer efforts. The volunteer sign up is available at surveyhero.com/c/viuf4h7p.

More than $4 million has been donated to the Team Western Kentucky Relief Fund as of Monday morning, Beshear said. Families who lost members in the storm will receive $5,000 to pay for funerals from this fund. Donations can be made at teamwkyrelief fund.ky.gov and are tax deductible.

Beshear ordered flags to flag at half-staff from Dec. 14 through Dec. 20 to honor those who lost their lives to the severe weather over the weekend.

First Lady Britainy Beshear launched the Western Kentucky Christmas Toy Drive on Monday for Kentuckians to help make Christmas special for as many kids and teens as possible who were affected by the tornadoes. From now through Saturday, Kentuckians can drop off new, unwrapped toys, games, books, technology in original packaging, or $25 Visa/Mastercard gift cards to 20 locations across the state, including the Paducah Police Department. A full list of drop-off locations is available at FirstLady.ky.gov/Toy Drive.