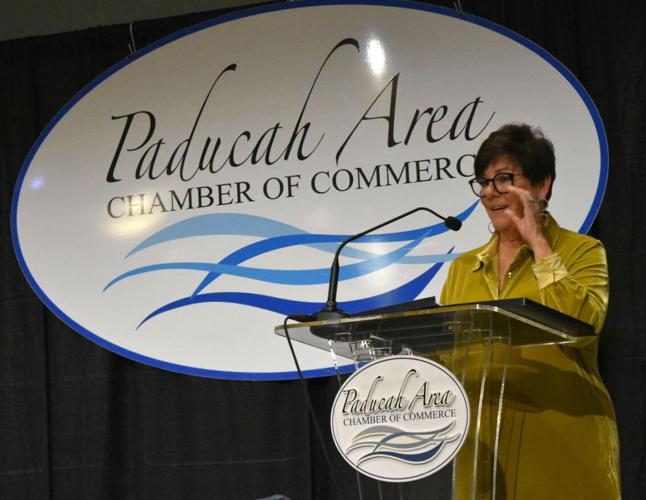 Dana Bowers, founder of Venminder and a Computer Services, Inc. board member, speaks at the Paducah Chamber of Commerce’s EmpowerHER Conference on Friday, Nov. 18 at the Julian Carroll Convention Center in Paducah. Area women from multiple generations attended the event, where speakers discussed business management centered around women’s experiences. 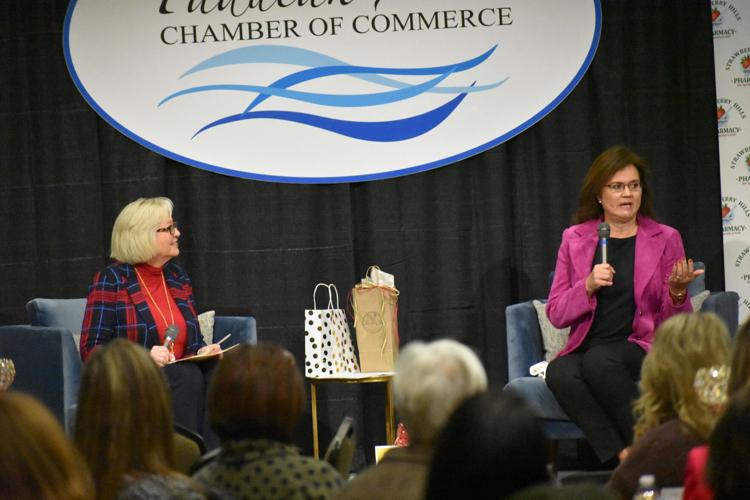 Dana Bowers, founder of Venminder and a Computer Services, Inc. board member, speaks at the Paducah Chamber of Commerce’s EmpowerHER Conference on Friday, Nov. 18 at the Julian Carroll Convention Center in Paducah. Area women from multiple generations attended the event, where speakers discussed business management centered around women’s experiences.

PADUCAH — More than 160 women and six men sat in the crowd Friday, Nov. 18 for the EmpowerHER Conference hosted by the Paducah Area Chamber of Commerce.

The women- and business-focused event featured keynote speaker Dana Bowers, a self-described “accidental entrepreneur” and founder of Venminder — a software-as-a-service company to manage client-vendor risks in cybersecurity and finances.

“I didn’t grow up dreaming of starting a business,” Bowers said to an audience, many millennial-age or younger, at the Julian Carroll Convention Center in downtown Paducah. “Through a series of chances and a few doses of tough lessons … I realized how many had empowered me along that journey — maybe not always the way I wanted or expected.”

Bowers painted her hometown of Radcliff as podunk — a “town of trailers and pawn shops” — and a lower-middle-class upbringing.

“It felt like I should have whispered I was from there,” she said. “It’s taken me a lifetime to realize growing up there was the first time I felt empowered to change assumptions.”

Rather than a clear-cut success story, Bowers recounted more setbacks than wins and more “frenemies” than confidants.

Her story — including a corporate freeze-out, a chauvinistic CEO, unemployment, motherhood, several smaller ventures and a dwindling naivete for the corporate world — eventually led to selling her company iPay Technologies, LLC in 2010 for $300 million.

“You think at that point we learned our lesson, but we dove back in,” Bowers said, explaining how she and her husband Mike founded Venminder.

“I’m always happy to share my story, but I’m also surprised people want to listen — it’s an ordinary life,” she said. “If there’s anything to take away, it’s how there’s always an opportunity, and sometimes it may not look like an opportunity.”

In a question-and-answer format with Paducah Area Chamber of Commerce President Sandra Wilson, Bowers felt skeptical toward the current generation with “work-life balance,” calling the term a possible harbinger of “more life than work” — “If you want it, you have to work longer hours,” she said.

Myrna Redfield, president and CEO of Four Rivers Nuclear Partnership, the primary deactivation and remediation contractor at the U.S. Department of Energy’s Paducah site, spoke about leading one of the area’s largest employers after arriving from the U.S. territory of Puerto Rico in her twenties.

“The best reward is that I consider myself from Paducah now, because I can say ‘y’all,’ ” Redfield said to laughs.

“But also, I’ve been able to help local talent go up in management … we’re out here growing our own people, and a lot of our management — for the first time — is from Paducah. I’m proud of that.”