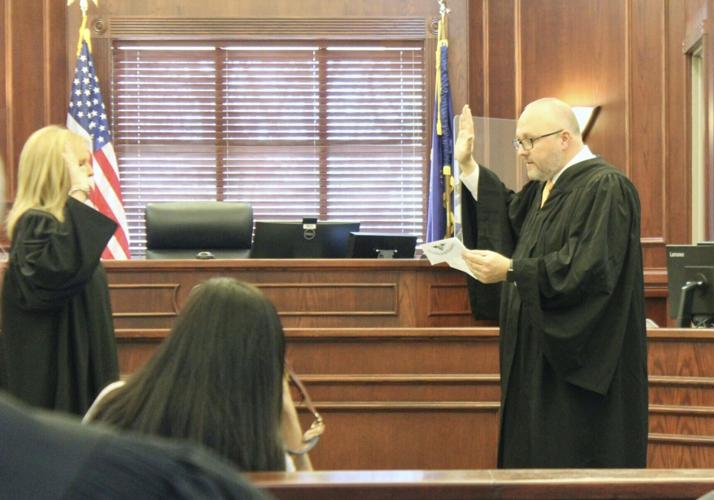 Judge Jamus Redd (right) performed the investiture of Judge Natalie White on Friday, Jan. 6. Due to restructuring last year, the two will now both serve as circuit court judges for the 56th District. 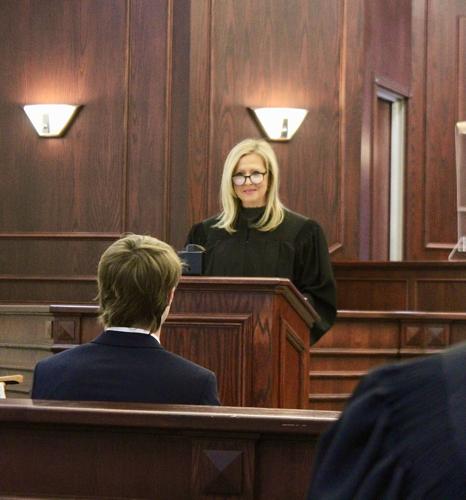 Natalie White is the first female circuit court judge for the 56th District.

Judge Jamus Redd (right) performed the investiture of Judge Natalie White on Friday, Jan. 6. Due to restructuring last year, the two will now both serve as circuit court judges for the 56th District.

Natalie White is the first female circuit court judge for the 56th District.

When 56th Judicial Circuit Judge Natalie White was sworn in on Friday afternoon, Jan. 6, she did so surrounded by family, friends and coworkers. All wished her well in the new venture and offered support.

The ceremony was off to a special start with White’s son, Aaron White, serving as master of ceremonies for the afternoon. He first introduced former Caldwell County attorney Bridgie Miller to offer the invocation.

Miller spoke on judges being ordained by God in his prayer, asking Him to provide White with knowledge, wisdom and guidance.

“We know not what the road is before us,” Miller said, “but we do know you (God) will be there on that road.”

White’s two daughters were also a part of the ceremony. Allison White sang “My Old Kentucky Home” and Anna White did a reading of the poem, “Do It Anyway,” by Mother Theresa.

56th District Judge Brandon Knoth was next to speak. He shared that when he was looking to hire an assistant as a newly elected county attorney, he was hesitant to hire White, as he didn’t know her. However, as he put it, he “hired her anyway,” and the two worked together for years.

Knoth joked that there had been several changes in the court recently, such as (now retired) Judge C.A. Woodall smiling more and (now Circuit) Judge Jamus Redd smiling less. However, Knoth also told Redd he believed he would be smiling more in the coming weeks, as White was funny. He remembered being called down by Redd for laughing at one of her jokes once in court.

Knoth also shared a memory of a time when two DUI case files came across his desk. One was of a driver who had admitted to driving under the influence, but still wanted his day in court. The other was in regard to a car that had been found wrecked and abandoned in a ditch and traced to a home a mile away.

“You can imagine which one I gave White,” said Knoth, laughing as he admitted it was probably a “jerk move” at the time.

“And I’ll never forget what she said when I did that,” he continued, “absolutely nothing. She took the file, prepared for trial and she tried the case. And she did that every single time I asked her.”

Knoth said he had the unique opportunity over the past four years to observe White both as a fellow presiding judge and while practicing in front of her.

“And I can tell you that she listens to everyone who appears before her,” he said. “She knows the law, she handles the unruly with patience and grace, and she is fair.”

Next to speak was Woodall, who spoke on the history of the judicial system in the 56th District, saying they should be proud of the work they had done.

White took a few minutes to thank her family and supporters at the end of the investiture. She also shared that she predicted it would be very easy to work with Redd.

“He always answers with thoughtfulness and a wealth of knowledge,” White said.

She took time to thank Woodall for his example he had set in court.

“You were given your day in court,” she said of him, “he was courteous to you and your clients, and he heard what they had to say.” White said she hopes to be the same.

“It’s something that I would also like to emulate, the patience that you had,” she said.

White also shared her hope for her future and the future of the 56th District as a whole. While White is the first female circuit judge, she hopes that 100 years from now, distinctions like that won’t matter because minorities will be commonplace as judges. As for her hope of how she will be remembered?

“I hope that they say I was fair and I was just,” White added.